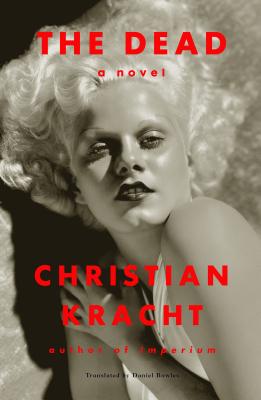 Christian Kracht reads from his new novel, The Dead.

“Imperium is astonishing and captivating, a tongue-in-cheek Conradian literary adventure for our time.” ―Karl Ove Knausgaard, author of My Struggle

“To say a word about Christian Kracht's Imperium would be like engraving Goethe's Conversations of German Refugees into an orange seed. Or perhaps into a coconut? The cocovore on his South Sea isle would consume it at some point, and then the writing would be gone. But then shadowy mountains of fate would still form in the background: the German history behind the dropouts who made it by escaping it, when the evil procession of fate halted for a moment. An adventure novel. No doubt. That there even is still such a thing.”―Elfriede Jelinek, author of The Piano Teacher and Winner of the Nobel Prize for Literature

“Reads at times like the best Werner Herzog movie Herzog has yet to make.”―Tobias Carroll, Biographile

In The Dead, the follow-up to his acclaimed novel Imperium (a Publishers Weekly Best Book of the Year), Christian Kracht mines the feverish film culture of the 1930s to produce a Gothic tale of global conspiracy, personal loss, and historical entanglements large and small.

In Berlin, Germany, in the early 1930s, the acclaimed Swiss film director Emil Nägeli receives the assignment of a lifetime: travel to Japan and make a film to establish the dominance of Adolf Hitler’s Nazi empire once and for all. But his handlers are unaware that Nägeli has colluded with the Jewish film critics to pursue an alternative objective―to create a monumental, modernist, allegorical spectacle to warn the world of the horror to come.

Meanwhile, in Japan, the film minister Masahiko Amakasu intends to counter Hollywood’s growing influence and usher in a new golden age of Japanese cinema by exploiting his Swiss visitor. The arrival of Nägeli’s film-star fiancée and a strangely thuggish, pistol-packing Charlie Chaplin―as well as the first stirrings of the winds of war―soon complicates both Amakasu’s and Nägeli’s plans, forcing them to face their demons . . . and their doom.

The Dead: A Novel (Hardcover)

“A great Faustian fable, and a literary endeavor of historical ingenuity that we now may start to characterize as Krachtian.” —Karl Ove Knausgaard

Imperium: A Fiction of the South Seas (Paperback)

One of Publishers Weekly's Ten Best Books of 2015

A Huffington Post Best Fiction Book of the Year