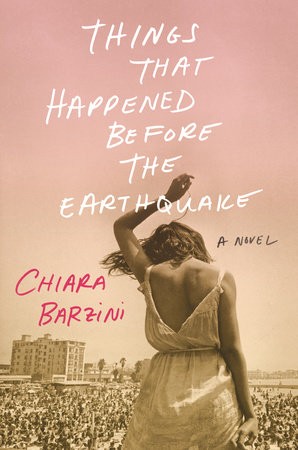 Chiara Barzini discusses her new novel, Things That Happened Before the Earthquake, with Kate Schatz.

“Chiara's stories are beautiful, her voice powerful. She writes with a voice that is both tense and open. The effect is surprising, subversive, and singular.”—Jhumpa Lahiri

“Chiara Barzini has written a wild first novel, full of sex, violence, and desperate prayers to the Virgin Mary. This is a brutal and bizarre coming of age story aptly set in one of America’s many crises.”—Catherine Lacey, author of Nobody is Ever Missing

“Chiara Barzini has pulled off that most dazzling balancing act: combining a deliciously entertaining plot with effortlessly elegant prose. She has an extraordinarily keen eye for cultural nuance. Through her alter-ego Eugenia we come to discover a California as wildly foreign to us as it is to her. A brilliant, sexy, and unexpected take on the immigrant bildungsroman.”—Taiye Selasi, author of Ghana Most Go.

About Things That Happened Before the Earthquake

Mere weeks after the 1992 riots that laid waste to Los Angeles, Eugenia, a typical Italian teenager, is rudely yanked from her privileged Roman milieu by her hippie-ish filmmaker parents and transplanted to the strange suburban world of the San Fernando Valley. With only the Virgin Mary to call on for guidance as her parents struggle to make it big, Hollywood fashion, she must navigate her huge new public high school, complete with Crips and Bloods and Persian gang members, and a car-based environment of 99-cent stores and obscure fast-food franchises and all-night raves. She forges friendships with Henry, who runs his mother's movie memorabilia store, and the bewitching Deva, who introduces her to the alternate cultural universe that is Topanga Canyon. And then the 1994 earthquake rocks the foundations not only of Eugenia's home but of the future she'd been imagining for herself.

Things That Happened Before the Earthquake: A Novel (Hardcover)

Rad Women Worldwide: Artists and Athletes, Pirates and Punks, and Other Revolutionaries Who Shaped History (Hardcover)

Educational and inspirational, this gift-worthy New York Times bestseller from the authors of Rad American Women A-Z, is a bold, illustrated collection of 40 biographical profiles showcasing extraordinary women from across the globe.