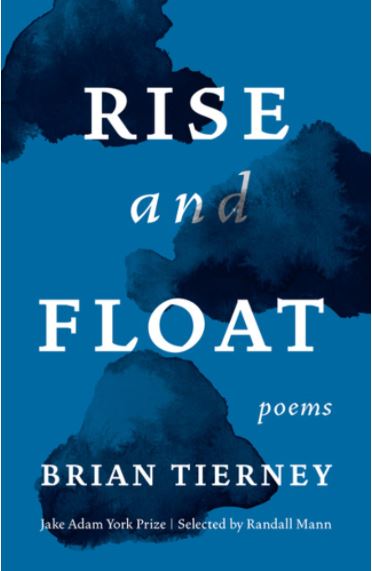 Or watch online by registering at the link here
https://us02web.zoom.us/webinar/register/WN_9-6fwK_HTtO7l-JobVYwPg

Praise for Rise and Float
“In these poems of turnpikes, water, and migraine light, filled with grief and life, the poet tells us it’s all right that ‘we don’t love / living.’ Here, precision is a form of metaphor, language a facet of experience; the poet writes with a kind of allusive purity and vulnerability—‘each thought a texture’—that I find moving. Rise and Float is that rare thing, a book of one striking poem after another. If I could write something as tender and nearly perfect as ‘You’re the One I Wanna Watch the Last Ships Go Down With’—a lightning strike, Randall Jarrell might have called it—then I’d consider giving up writing.”—Randall Mann

“If the job of the poet is to make our interiority knowable and known, then this book by Brian Tierney triumphs. In this magnificent debut, a poet arrives to us fully formed, and Tierney has found ways to transform the mundane into the mysterious, and the mysterious into the transcendent. Readers will be swept away by the rigors of syntax, the sparse and charged diction, and the voice of these worldly, humane, sophisticated poems.”—Mark Wunderlich

“Brian Tierney's Rise and Float is resonant with the desire for rapture and the never-easing reality of loss. How do we go on living, these poems seem to ask, bearing what we must bear? And in lines by turns dolorous and defiant, they answer: We watch, we remember, and we sing.”—Tracy K. Smith

About Rise and Float
Chosen by Randall Mann as a winner of the Jake Adam York Prize, Brian Tierney’s Rise and Float depicts the journey of a poet working—remarkably, miraculously—to make our most profound, private wounds visible on the page.

With the “corpse of Frost” under his heel, Tierney reckons with a life that resists poetic rendition. The transgenerational impact of mental illness, a struggle with disordered eating, a father’s death from cancer, the loss of loved ones to addiction and suicide—all of these compound to “month after / month” and “dream / after dream” of struck-through lines. Still, Tierney commands poetry’s cathartic potential through searing images: wallpaper peeling like “wrist skin when a grater slips,” a “laugh as good as a scream,” pears as hard as a tumor. These poems commune with their ghosts not to overcome, but to release.

The course of Rise and Float is not straightforward. Where one poem gently confesses to “trying, these days, to believe again / in people,” another concedes that “defeat / sometimes is defeat / without purpose.” Look: the chair is just a chair.” But therein lies the beauty of this collection: in the proximity (and occasional overlap) of these voices, we see something alluringly, openly human. Between a boy “torn open” by dogs and a suicide, “two beautiful teenagers are kissing.” Between screams, something intimate—hope, however difficult it may be.

Chosen by Randall Mann as a winner of the Jake Adam York Prize, Brian Tierney's Rise and Float depicts the journey of a poet working--remarkably, miraculously--to make our most profound, private wounds visible on the page.

The Red Arrow: A novel (Hardcover)

A singular, cosmically charged journey through art, memory, and the ways our lives intertwine and align within the riddles of space and time.

From “a writer of breathtaking honesty” (David Ulin, LA Times), gorgeous new poems that are satirical, open-hearted, and unrepentantly queer.

The Complete Stories announces its desire and its lie in the title; this is a book of shatter and loss. In his second collection, Noah Warren--previously selected by Carl Phillips for the Yale Series of Younger Poets--unravels histories both personal and public, picking apart their ugliness, beauty, and irreducible singularity.