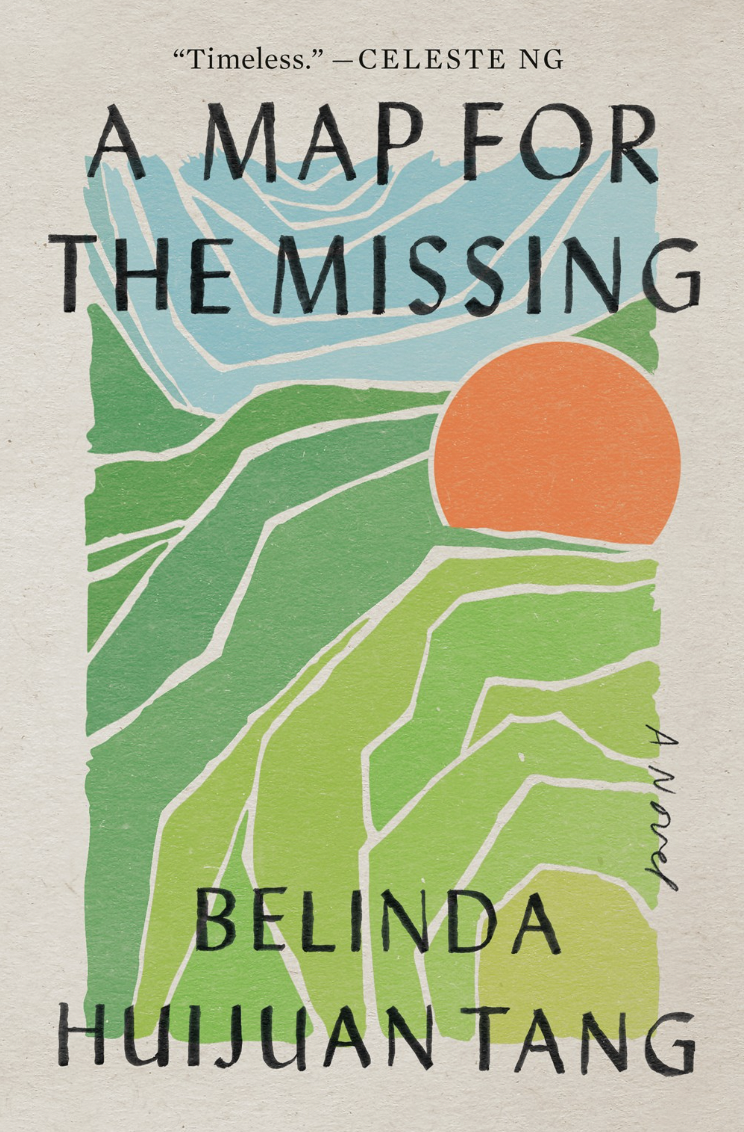 Join us on Wednesday, August 17 at 7pm PT when Belinda Huijuan Tang celebrates her novel, A Map for the Missing, with K-Ming Chang at 9th Ave!
Presented in proud partnership with The Ruby

Or watch online by registering at the link below
https://us02web.zoom.us/webinar/register/WN_UK6tG4OVRbmsoGqp0p6dsg

Praise for A Map for the Missing
“A wonderful, accomplished debut, written with wisdom and compassion. The private dignity of Tang’s characters is breathtaking, her sense of time and place patient and true. I am full of admiration.” —Meng Jin, author of Little Gods

“A Map for the Missing gives vivid life to the uncanny truths of return, reunion, and time. A simple mystery—a father who has vanished—forcefully animates the story, but what casts a spell over readers and makes this novel so memorable is the attention, both loving and piercing, with which the author regards her characters. Belinda Huijuan Tang’s debut is vigorous and deft, intricate and precise.” —Jamel Brinkley, author of A Lucky Man, finalist for the National Book Award

“An engrossing saga of a young mathematician caught between two countries, two cultures, two eras, and two loves. Set against the violent turmoil of the Chinese Cultural Revolution, this powerful debut explores the wrenching impact of political ideologies on individual lives in a way that is resonant and timely.” —Ruth Ozeki, author of The Book of Form and Emptiness and A Tale for the Time Being

“Belinda Huijuan Tang’s debut novel is a beautifully drawn, sensitively rendered portrait of a man desperately searching for his father—and for reconnection to the past and people he once knew and loved. Both rich in historical detail and timeless in scope, A Map for the Missing explores the costs of choosing your own path, whether what’s left behind can ever be retrieved, and whether it is possible to forgive the wounds we inevitably inflict on each other.” —Celeste Ng, #1 New York Times bestselling author of Little Fires Everywhere

Tang Yitian has been living in America for almost a decade when he receives an urgent phone call from his mother: his father has disappeared from the family’s rural village in China. Though they have been estranged for years, Yitian promises to come home.

When Yitian attempts to piece together what may have happened, he struggles to navigate China’s impenetrable bureaucracy as an outsider, and his mother’s evasiveness only deepens the mystery. So he seeks out a childhood friend who may be in a position to help: Tian Hanwen, the only other person who shared Yitian’s desire to pursue a life of knowledge. As a teenager, Hanwen was “sent down” from Shanghai to Yitian’s village as part of the country’s rustication campaign. Young and in love, they dreamed of attending university in the city together. But when their plans resulted in a terrible tragedy, their paths diverged, and while Yitian ended up a professor in America, Hanwen was left behind, resigned to life as a midlevel bureaucrat’s wealthy housewife.

Reuniting for the first time as adults, Yitian and Hanwen embark on the search for Yitian’s father, all the while grappling with the past—who Yitian’s father really was, and what might have been. Spanning the late 1970s to 1990s and moving effortlessly between rural provinces and big cities, A Map for the Missing is a deeply felt examination of family and forgiveness, and the meaning of home.

About Belinda Huijuan Tang
Belinda Huijuan Tang is a 2021 graduate of the Iowa Writers’ Workshop, where she was a Truman Capote Fellow and recipient of the Michener-Copernicus Fellowship. She holds a BA from Stanford University and was a 2019 work-study fellow at the Middlebury Bread Loaf Writers’ Conference. She lived in China from 2016 to 2018 and, while there, received an MA from Peking University in Beijing. She currently lives in Los Angeles.

About K-Ming Chang
K-Ming Chang is a Kundiman fellow, a Lambda Literary Award finalist, and a National Book Foundation 5 Under 35 honoree. She is the author of the novel Bestiary, which was longlisted for the Center for Fiction First Novel Prize, the PEN/Faulkner Award, and the VCU Cabell First Novelist Award. Her latest book, Gods of Want: Stories, is out now.

About The Ruby
The Ruby is an arts & letters–focused work and gathering space in San Francisco. It's a 3,800-square-foot multipurpose space for women, trans women, and nonbinary individuals with diverse interests, seeking a welcoming, supportive environment in which to learn, share, and connect. During nights and weekends, The Ruby hosts social gatherings, skill-sharing, political organizing, and more.  At The Ruby, members can recharge, focus on — and find inspiration for — their creative work, and get support from a likeminded community.

A Map for the Missing: A Novel (Hardcover)

Longlisted for the Center for Fiction’s 2022 First Novel Prize!

Startling stories center the bodies, memories, myths, and relationships of Asian American women in “a voracious, probing collection, proof of how exhilarating the short story can be” (The New York Times Book Review)—from the National Book Award “5 Under 35” honoree and author of Bestiary