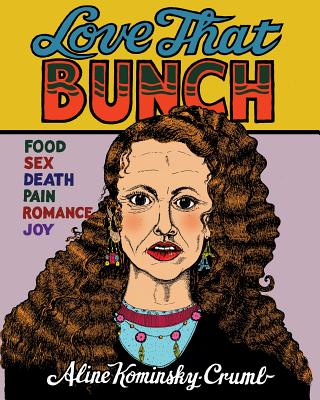 “For over 40 years, Kominsky-Crumb has chronicled agony and ecstasy through brutally honest portraits . . . She changed the game for women comics—not to mention women comedians, authors and artists.”—The Huffington Post

“Kominsky-Crumb’s line has a freshness and energy that make her strips feel more honest and closer to autobiography than self-mythologizing.”—The New Republic

About Love That Bunch

Aline Kominsky-Crumb redefined the Bay Area’s underground comix scene with unabashedly raw, dirty, unfiltered comics chronicling the thoughts and desires of a woman coming of age in the 1960s. Kominsky-Crumb didn’t worry about self-flattery: her darkest secrets and deepest insecurities were the fodder for groundbreaking stories. Her exaggerated comix alter ego, Bunch, is self-destructive and grotesque but crackles with the self-deprecating humor and honesty of a cartoonist confident in the story she wants to tell.

Collecting comics from the 1970s through today, Love That Bunch is shockingly prescient while still being an authentic story of its era. Kominsky-Crumb was ahead of her time in juxtaposing the contradictory nature of female sexuality with a proud, complicated feminism. Most important, she does so without apology.

One of the most famous and idiosyncratic cartoonists of our time, Kominsky-Crumb traces her steps as a Beatles-loving fangirl, an East Village groupie, an adult grappling with her childhood, and a 1980s housewife and mother. A new thirty-page story, “Dream House,” looks back on her childhood forty years later. Love That Bunch will be Kominsky-Crumb’s only solo-authored book in print. Originally published in 1990, this new expanded edition follows her to the present, including a foreword penned by the noted comics scholar Hillary Chute.

Why Comics?: From Underground to Everywhere (Hardcover)

"...a tour de force of the world of comics, from high-minded graphic novels to Superman..." New York Times