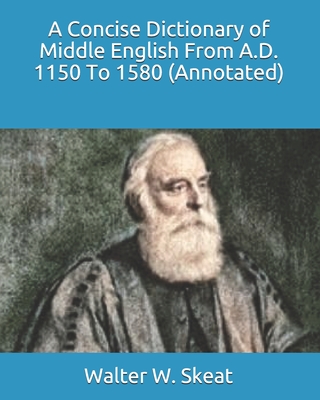 By Walter W. Skeat
$25.88
NOT on our shelves now. Usually ships from warehouse in several days.

Differentiated book- It has a historical context with research of the time-A Concise Dictionary of Middle English from A.D. 1150 to 1580 by Walter W. Skeat.This book contains a historical context, where past events or the study and narration of these events are examined. The historical context refers to the circumstances and incidents surrounding an event. This context is formed by everything that, in some way, influences the event when it happens. A fact is always tied to its time: that is, to its time. Therefore, when analyzing events that took place tens, hundreds or thousands of years ago, it is essential to know the historical context to understand them. Otherwise, we would be analyzing and judging what happened in a totally different era with a current perspective.Walter William Skeat, FBA (21 November 1835 - 6 October 1912) was the pre-eminent British philologist of his time. He was instrumental in developing the English language as a higher education subject in the United Kingdom.Skeat was born in London to architect William Skeat, of Perry Hill, Sydenham, later of Mount Street, Park Lane, City of Westminster, and his wife Sarah, daughter of Timothy Bluck. The Skeat family were a branch of an ancient Surrey family, and were resident in the parish of St George Hanover Square since the 1700s.] He was educated at King's College School (Wimbledon), Highgate School, and Christ's College, Cambridge. He became a fellow at Christ's College in July 1860.