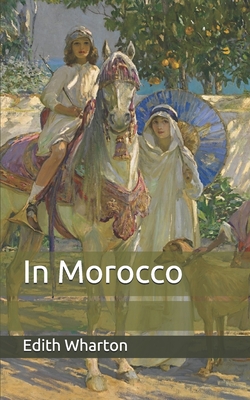 By Edith Wharton
$10.34
NOT on our shelves now. Usually ships from warehouse in several days.

To step on board a steamer in a Spanish port, and three hours later to land in a countrywithout a guide-book, is a sensation to rouse the hunger of the repletest sight-seer.The sensation is attainable by any one who will take the trouble to row out into theharbour of Algeciras and scramble onto a little black boat headed across the straits. Hardlyhas the rock of Gibraltar turned to cloud when one's foot is on the soil of an almostunknown Africa. Tangier, indeed, is in the guide-books; but, cuckoo-like, it has had to laysits eggs in strange nests, and the traveller who wants to find out about it must acquire awork dealing with some other country-Spain or Portugal or Algeria. There is no guidebook to Morocco, and no way of knowing, once one has left Tangier behind, where the longtrail over the Rif is going to land one, in the sense understood by any one accustomed toEuropean certainties. The air of the unforeseen blows on one from the roadless passes ofthe Atlas.This feeling of adventure is heightened by the contrast between Tangier-cosmopolitan, frowsy, familiar Tangier, that every tourist has visited for the last forty years-and the vastunknown just beyond. One has met, of course, travellers who have been to Fez; but theyhave gone there on special missions, under escort, mysteriously, perhaps perilously; theexpedition has seemed, till lately, a considerable affair. And when one opens the records ofMoroccan travellers written within the last twenty years, how many, even of the mostadventurous, are found to have gone beyond Fez? And what, to this day, do the names ofMeknez and Marrakech, of Mogador, Saffi or Rabat, signify to any but a few students ofpolitical history, a few explorers and naturalists? Not till within the last year has Moroccobeen open to travel from Tangier to the Great Atlas, and from Moulay Idriss to the Atlantic.Three years ago Christians were being massacred in the streets of Sal , the pirate townacross the river from Rabat, and two years ago no European had been allowed to enter theSacred City of Moulay Idriss, the burial-place of the lawful descendant of Ali, founder of theIdrissite dynasty. Now, thanks to the energy and the imagination of one of the greatest ofcolonial administrators, the country, at least in the French zone, is as safe and open as theopposite shore of Spain. All that remains is to tell the traveller how to find his way about it.