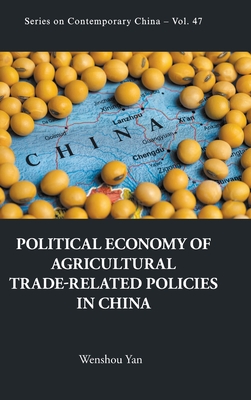 By Wenshou Yan
$105.30
NOT on our shelves now. Usually ships from warehouse in several days.

This book seeks to understand the simultaneous economic and political contributors to China's changing agricultural protection levels and the central government's choice of policy instruments to tax or assist farmers. It theoretically explores the motivation behind agricultural trade-related support policies through extending the two-sector specific factors production model to three sectors, so as to make it more relevant for a one-party state such as China. Chapter three tests that theory empirically, using panel data on agricultural distortions for the period 1981 to 2010 from Anderson and Nelgen (2013). The long-running trend in the level of assistance to the farm sector sees considerable fluctuations in support each year, which has been attributed to fluctuations in international prices of agricultural products. Chapter four seeks to explain the Chinese government's responses to world market price fluctuations. In practice, the government does have other instruments besides trade restrictions to alter domestic producer and consumer prices in the face of fluctuating international prices. Chapter five explores the role that public storage policy can play in contributing to the government's objective of stabilizing the domestic market price of farm products. The final chapter of the book draws out implications for policymakers in China and elsewhere.