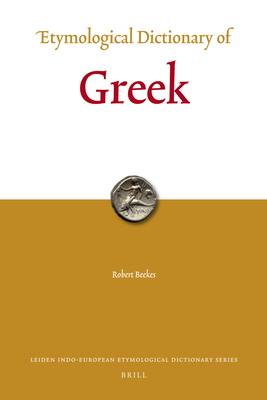 A must-have research tool that should be on every classicist's desk.

The first comprehensive etymological dictionary of Greek in the English language

Greek is among the most intensely and widely studied languages known. Since the publication of the last etymological dictionary of Greek, both the reconstruction of Proto-Indo-European, and our knowledge of the Greek substrate have led to numerous, often surprising new insights into the history and formation of the Greek vocabulary.
This dictionary is a treasure trove covering 2000 years of Ancient Greek: from Mycenaean via Homer and the classical period to lexicographers, such as Hesychius (5th century A.D.).
It consists of 7500 entries with thoroughly revised etymologies. Each entry gives clear information about the origin of the Greek word and its first date of attestation. It further provides all etymologically relevant variants, dialectal forms, derivatives, compounds, and bibliographical references.
This dictionary is a truly indispensable tool for those in search of a deeper knowledge of the Greek vocabulary, its history and, therewith, a better understanding of the language.