Hildegard Von Bingen: In the Heart of God (Hardcover) 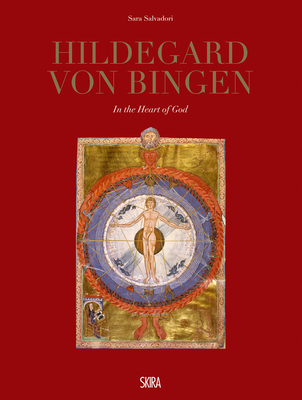 A full reproduction of the medieval composer and visionary's final theological tract, illuminated shortly after her death

Between 1142 and 1174, the German mystic, composer and writer Hildegard von Bingen created three visionary books: Scivias (Know the Ways); Liber Vitae Meritorum (Book of the Rewards of Life); and Liber Divinorum Operum(Book of Divine Works). This latter work--reproduced in this sumptuous new volume--consists of a sequence of ten scenes that invites human beings to climb the road of virginitas toward the recomposition of their own selves in union with the divine caritas.
The refined miniatures in the Lucca manuscript--reproduced here with a simple key explaining their symbolic significance--were produced about 20 years after Hildegard's death and provide a masterful illustration of the architecture of her vision. The dialogue with the images from her first work, Scivias (published in Skira's Hildegard von Bingen: A Journey into the Images) casts light on the unifying design that connects them.
Hildegard von Bingen (1098-1179) was a German Benedictine nun and polymath. She is renowned as a composer of sacred monophonic music, as well as for her three volumes of visionary theology: Scivias, the Liber Vitae Meritorum and the Liber Divinorum Operum. In recent decades, her music has proved immensely popular with performers of medieval music. In 2012, she was named a Doctor of the Church, one of only four women with that distinction in the Catholic church.