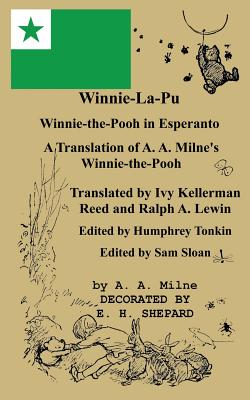 By A. A. Milne, Ivy Kelerman Reed (Translator), Ralph a. Lewin (Translator)
Not available to order
Stock uncertain--should fulfill within 10 days or so

Winnie-the-Pooh is the most popular children's book in the world. Esperanto is a language read and spoken by two million people. This translation of this book into Esperanto is by Ivy Kellerman Reed and Ralph A. Lewin. Esperanto is a constructed, invented language. It was invented by a Polish Jewish doctor L. L. Zamenhof in 1887. Dr. Zamenhof was well aware that God had decreed that all men should speak different languages so that they could not understand each other. Nevertheless, he decided to defy the orders of God by inventing this language, apparently not concerned that he might be ZAPPED. As explained in the Bible in Genesis 11:1-9, God was concerned that humans had blasphemed by building a tower to avoid a second flood so God brought into existence multiple languages. Thus, humans were divided into linguistic groups, unable to understand one another. Apparently unconcerned that God might strike him dead for doing this, Dr. Zamenhof decided this was all nonsense and if men could talk to each other they would not go to war against each other and peace and harmony would prevail throughout the world, so he invented this language. He published it under the pseudonym "Dr. Esperanto," but the name of the language came to be known as Esperanto. The main features of the language are there are no irregular verbs. There are no declined nouns. Every noun ends with o, every verb ends with a. One regrettable feature is that although it follows the Latin alphabet, it adds six new characters: ĉ, ĝ, ĥ, ĵ, ŝ, and ŭ. This translation of Winnie-the-Pooh follows the original book closely. The purpose of this book is to help Esperanto speakers learn English and to help English speakers learn Esperanto. To have a translation as close as possible to the original is the most useful. Because Esperanto was invented by a man from Poland it is sometimes classified as a Polish Language. However, it is not any kind of language at all. It is not Slavic or even Indo-European. Esperanto reached its peak in the 1920s when the Communist Party briefly adopted it. Stalin first adopted it and then turned against it. Although now relatively few in number, the advocates of Esperanto are fervently devoted to it and still claim they will take over the world. The World Esperanto Association is headquartered in Rotterdam, The Netherlands. It has a branch in New York City. Esperanto is scattered internationally. Most widely represented is Japan, China, France, Germany, Italy, Poland, United States, Brazil, Belgium, and United Kingdom (in order of number of members in the World Esperanto Association). It is the only constructed language that has gained widespread acceptance.