Survival and Sacrifice in Mars Exploration: What We Know from Polar Expeditions (Paperback) 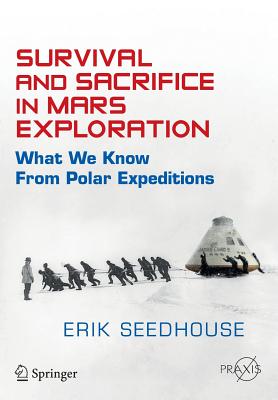 Erik Seedhouse is a Norwegian suborbital astronaut whose life-long ambition is to work in space. After completing a degree in Sports Science, the author joined the 2nd Battalion the Parachute Regiment. During his time in the "Para's", Erik spent six months in Belize, where he was trained in the art of jungle warfare. Later, he spent several months learning the intricacies of desert warfare in Cyprus. He made more than 30 jumps from a C130, performed more than 200 helicopter abseils, and fired more anti-tank weapons than he cares to remember! Upon returning to the comparatively mundane world of academia, the author embarked upon a master's degree in Medical Science, supporting his studies by winning prize money in 100-km running races. After placing third in the World 100 km Championships, the author turned to ultra-distance triathlon, winning the World Endurance Triathlon Championships in 1995 and 1996. For good measure, he won the World Double Ironman Championships and the Decatriathlon, an event requiring competitors to swim 38 km, cycle 1,800 km, and run 422 km. Non-stop! Returning to academia, Erik pursued his Ph.D. at the German Space Agency's Institute for Space Medicine. While studying, he won Ultraman Hawaii and the European Ultraman Championships, and completed Race Across America. As the world's leading ultra-distance triathlete, Erik was featured in dozens of magazines and television interviews. In 1997, GQ magazine nominated him as the "Fittest Man in the World". In 1999, Erik retired from triathlon and started post-doctoral studies. In 2005, he worked as an astronaut training consultant for Bigelow Aerospace and wrote Tourists in Space. He is a Fellow of the British Interplanetary Society and a member of the Space Medical Association. In 2009, he was one of the final 30 candidates in the Canadian Space Agency's Astronaut Recruitment Campaign. Erik works as a spaceflight instructor for the American Astronautics Institute, professional speaker, triathlon coach, author, and Editor-in-Chief for the Handbook of Life Support Systems for Spacecraft. He is the Training Director for Astronauts for Hire and, between 2008 and 2013, he served as director of Canada's manned centrifuge operations. In addition to being a suborbital astronaut, triathlete, centrifuge operator, pilot, and author, Erik is an avid mountaineer and is pursuing his goal of climbing the Seven Summits. Survival and Sacrifice is his seventeenth book. When not writing, he spends as much time as possible in Kona on the Big Island of Hawaii and at his real home in Sandefjord, Norway. Erik and his wife, Doina, are owned by three rambunctious cats - Jasper, Mini-Mach, and Lava.