Lex, Rex, Or The Law And The Prince: A Dispute For The Just Prerogative Of King And People (Paperback) 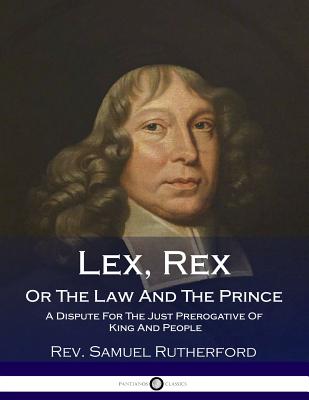 By Samuel Rutherford
$14.94
NOT on our shelves now. Usually ships from warehouse in several days.

Reverend Samuel Rutherford wrote Lex, Rex to defend and advance the Presbytarian ideals in government and political life, and oppose the notion of a monarch's Divine Right to rule.
Writing in the 1640s, Rutherford lived in a time of political tumult and upheaval. The notion of Divine Right - whether a monarch ruled with the authority of God - was under increasing question. The steadily waning power of the monarch, increasing rates of literacy and education, and enfranchisement of classes that followed the Renaissance bore fruit in demands for governmental reform.
No greater were these trends felt than in England, whose Parliament had over centuries gained power. Shaken to its foundations by the aftermath of religious Reformation in the 1500s, the authority of the monarch was under great scrutiny. The follies of absolute power, whereby one ruler had capacity to take decisions affecting the lives of millions, were now an active source of agitation and discontentment in both the halls of power and amid the wider populace. The luxuries and excesses of King Charles I, and the resultant taxes, were likewise cause for agitation.
Lex, Rex would prove a forerunner to the Enlightenment era theories of democratic government and the notion of a government for the people. It demolishes the notion of divine right by referring to the actual tenets of the Biblical Old Testament. Most poignantly of all, Rutherford proposes a series of radical reforms such as the establishment of a Constitution, and the delegation of rights to the population to rule themselves; a measure foretelling 'small government' philosophies that followed. The book is organized into forty-four questions, each of whom considers and answers common arguments of the author's fractious era.
Rutherford's ideas were in direct contravention to the monarchic societies in Europe at the time. They undoubtedly gave the Parliamentarian movement, and educated Republicans in general, a sound scholarly ground with which to begin the English Civil War and enact long-lasting reforms. The questions answered in Lex, Rex - persuasively, convincingly and explosively as they were - would lead England on the road to enshrining its own Parliamentary democracy.