At Home in the Kitchen: Simple Recipes from a Chef's Night Off [A Cookbook] (Hardcover) 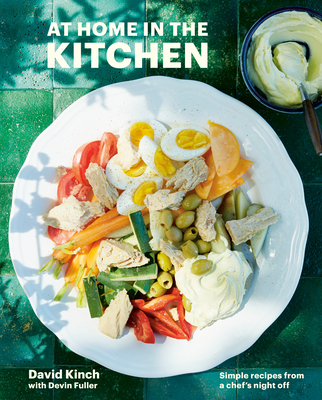 “An instant classic, it defines California cool and wears its sophistication lightly.”—Padma Lakshmi

When David Kinch isn’t working at one of his restaurants, he cooks in his strawberry-colored bungalow—affectionately known as the Pink Palace—where he lives on the Northern California coast. A casual meal might include a rustic pasta made with cans from the pantry, a simple roasted chicken, or too many oysters to count.

In At Home in the Kitchen, you’ll find David’s ready-for-anything Mother-Sauce Mayo, a revelatory Guacamole with Pomegranate, the best make-ahead Grilled Cheese, and everything you want to eat for dinner tonight: Onion & Brioche Soup, Brussels Sprouts with Cider & Goat Cheese, Penne with a Walnut Sauce, Jambalaya New Orleans Style, Oven-Roasted Potatoes with Cod, Whole Roast Cauliflower with Capers & Egg, and much more.

Photographed on location in the coastal town of Santa Cruz, where David surfs, sails, and entertains, this laid-back cookbook is packed with go-to recipes, songs to listen to while cooking, and a few classic cocktails (rhum punch, daiquiris, sangria, margaritas!) to set a cheerful mood. And while each recipe has no more than a few key ingredients, David’s clever techniques, subtle twists, and fresh flavor combinations guarantee delicious—and impressive!—results  in no time at all.

David Kinch is the internationally recognized chef and co-owner of Manresa, Manresa Bread, The Bywater, and Mentone. Manresa has attained three stars from the MICHELIN Guide (its highest honor), is an esteemed member of the prestigious Relais & Châteaux and Les Grandes Tables du Monde organizations, and is frequently cited as one of the world’s best restaurants. David is consistently acknowledged as a leader in the culinary industry, with his peers voting him into the Top 25 of the World’s Best Chefs 2020 via Le Chef magazine. David is also the author of the New York Times bestseller Manresa: An Edible Reflection, and he won an Emmy Award for his role in the PBS series The Mind of a Chef. He enjoys spending time outside surfing and sailing along the California coast.

Devin Fuller is a writer and San Francisco Bay Area native who started her culinary career begging for kitchen shifts at a Hawaiian plate lunch chain while studying anthropology at the University of Oregon. She has been in the restaurant industry ever since, working everywhere from bars and coffee shops to casual restaurants before returning to California to work at Manresa. Partial to both the city and the ocean, she currently lives in San Francisco’s Outer Sunset district.

“This is not the book you’re expecting from a big deal chef. It’s an engaging look at a guy who just loves cooking for his friends. You end up wishing you could drop in on David for a casual dinner—and in the meantime, you’ll want to cook his easygoing dishes for your own friends.”—Ruth Reichl

“David Kinch makes cooking easy, seductive, and fun. Beautifully written and well composed, this book will teach you all the classics, everything you need to be an enviable and deft host. The musical playlist alone is worth the price. An instant classic, it defines California cool and wears its sophistication lightly.”—Padma Lakshmi, creator of Taste the Nation and New York Times bestselling author of Love, Loss, and What We Ate

“This book demonstrates the true brilliance of David’s cooking . . . simplicity, elegance, and generosity of spirit.”—Carlo Mirarchi, chef/owner of Roberta’s and Blanca

“David’s passion for thoughtful ingredients is captivating. What a great opportunity to learn his magical cooking at home.”—Nina Compton, chef at Compère Lapin and Bywater American Bistro