The Untold History of the United States (Paperback) 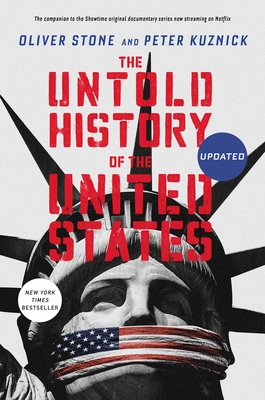 “Indispensable…There is much here to reflect upon.” —President Mikhail Gorbachev

“As riveting, eye-opening, and thought-provoking as any history book you will ever read...Can’t recommend it highly enough.” —Glenn Greenwald, The Guardian

“Finally, a book with the guts to challenge the accepted narrative of recent American history.” —Bill Maher

“Kuznick and Stone’s Untold History is the most important historical narrative of this century; a carefully researched and brilliantly rendered account.” —Martin Sherwin, Pulitzer Prize-winning co-author of American Prometheus

“A work of courage, wisdom, and compassion [that] will stand the test of time….A fierce critique and a passionate paean for Stone and Kuznick’s native land.” —Ambassador Akbar Ahmed, author of The Thistle and the Drone

The New York Times bestselling companion to the Showtime documentary series now streaming on Netflix, updated to cover the past five years.

A PEOPLE’S HISTORY OF THE AMERICAN EMPIRE

Oliver Stone made such iconic films as Platoon, Wall Street, JFK, Born on the Fourth of July, Natural Born Killers, Nixon, Salvador, and W., and is the author of the highly acclaimed memoir Chasing the Light.

Peter Kuznick is professor of history and director of the award-winning Nuclear Studies Institute at American University and is currently serving his sixth three-year term as distinguished lecturer with the Organization of American Historians. He has written extensively about science and politics, nuclear history, and Cold War culture.