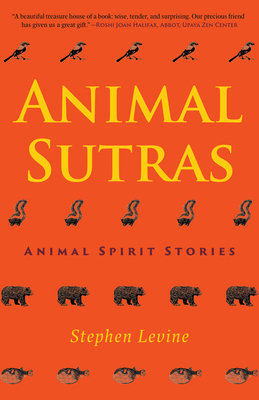 By Stephen Levine, Joanne Cacciatore (Foreword by), Mirabai Starr (Afterword by)
$21.95
On Our Shelves Now. Call store for up-to-the-minute availability.

THE RENOWNED TEACHER AND AUTHOR'S SPIRITUAL MEMOIR, AS TOLD THROUGH HIS LIFELONG ENCOUNTERS WITH ANIMALS AND NATURE

"I love this book. It feels like a secret treasure bequeathed by Stephen Levine to be opened after his death--an overflowing vessel of insight, humor and literary genius. Animal Sutras may be the best book Stephen Levine ever wrote." --Mirabai Starr, Wild Mercy

"Stephen was a profound healer of the heart, writer and meditation teacher. In Animal Sutras, his other gifts shine, as a wise poet-naturalist and Dharma storyteller-philosopher, offered here in a lyrical, quirky, playful, and inviting collection." --Jack Kornfield, A Path With Heart

For Stephen Levine, "animal-people" were his greatest teachers. So, at age seventy, he began collecting animal spirit stories and transcendent moments in nature from throughout his life--from the green snake who taught him to meditate as a boy to the generous hen whom predators would not harm, and many more. "Animals have a natural mindfulness," Levine writes. "They know what they are doing. Humans, who are full of confusion and seldom wholly in touch with their mind/body, need encouragement and technique to live in the present."

Stephen Levine (1937-2016) was an American poet, author, and spiritual teacher best known for his work, with his wife Ondrea, on death and dying. He is one of a generation of pioneering teachers who made Theravada Buddhism more widely available to students in the West. Like the writings of his colleague and close friend Ram Dass (formerly Richard Alpert), Levine's work is also flavored by the devotional practices and teachings of the Hindu guru Neem Karoli Baba. Levine spent many years in the Southwest, including one tending a wildlife sanctuary in southern Arizona, and among the mountains of New Mexico, where Ondrea still lives. His many books include Who Dies?, A Year to Live, Unattended Sorrow, and Healing into Life and Death.