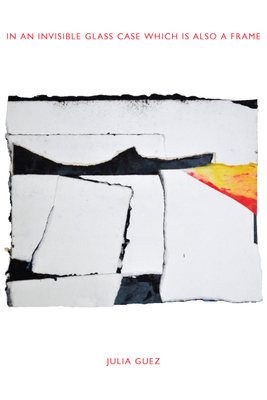 A close look at the rigors of our current cultural moment, In an Invisible Glass Case Which Is Also a Frame offers readers a way to navigate vital questions: what does it mean to be “secure”? How do we make art amid complexity? In Guez’s debut, readers will witness realities of income inequality, climate change, and the opioid epidemic alongside a series of reliable antidotes: art, music, humor, and love. “Have we made it across the vast plain of night?” asks one poem. No, not quite. There is more night, but there is singing, too. Rich in its sophisticated engagement of a “still life” series, dilemmas large and small, political and personal, are treated with generosity, curiosity, and a precise investigation of the heart.

Julia Guez’s poetry, essays, interviews and translations have appeared in Poetry, the Guardian, PEN Poetry Series, the Kenyon Review, BOMB and the Brooklyn Rail. She has been awarded the Discovery/Boston Review Poetry Prize, a Fulbright Fellowship and the John Frederick Nims Memorial Prize in Translation. Guez holds degrees from Rice and Columbia. For the last decade, she has worked with Teach For America; she’s currently a managing director of programming there. She also teaches creative writing at Rutgers and writes poetry reviews for Publishers Weekly. Guez lives in Brooklyn.

"As its title suggests, Guez’s lucid and impeccably curated debut is concerned with the act (or art) of setting aside representative specimens for one’s marvel and scrutiny, stray or key elements of experience ('a cistern full of asters,' 'half-light through the curtains,' 'a body / defining itself more broadly / as the province of another body') that hint at the vast unfathomable whole of a life. The impulse to do so seems rooted in an almost classical susceptibility to beauty and to pain, often felt at the same time, as well as in the will to manage what feels like chaos by containing it in words, performing what Tennyson calls 'the sad mechanic exercise, / Like dull narcotics, numbing pain.' The lure of drugs, death, and other forms of escape haunt these poems—whose voice already seems so fully developed and distinctive—but ultimately the stronger draw is towards life itself, its common sacraments and mysteries, marriages and births, which Guez’s exceptional artistic wisdom help us to find, after all this hardship, nothing short of miraculous." —Timothy Donnelly


“In an Invisible Glass Case Which Is Also a Frame is a debut collection that marvels at the full and often unbelievable spectrum of life. In these poems the body becomes a strange chameleon; parenthood an opening to unspeakable joy and terror; and the self a spinning top of equal parts awareness and wildness. Guez moves deftly from the domestic to the political, from the literary to the mundane: any line in this collection is sure to contain a diversity of reference and register that continually surprises and rewards the reader. Marked by intelligence, humor, and empathy, this daring collection is nothing short of an exclamation of living.” —Amy Meng

“‘Maybe there is no magic,’ Julia Guez ponders early in In an Invisible Glass Case Which Is Also a Frame, but the book quickly shows: there is magic, and it’s unmistakable. Guez’s poems are fields readers will float through, lifted by a variety of forces—tectonic, narcotic, avian, bodily, cosmic. The effect is remarkable, incantatory, and deeply strange: ‘From the moon whose many deaths meant only to console us // a faint promise . . . ’ Guez has built something remarkable here, a book that feels both totally unprecedented and absolutely inevitable.” —Kaveh Akbar

“To read In an Invisible Glass Case Which Is Also a Frame is to encounter ‘trees which must bleed to speak’ and ‘the self above the body’ and ‘dust, algebra and fire.’ With great precision, Julia Guez arranges the things of the world into richly imagined tableaux. Guez also beautifully arranges thinking and feeling. Her poems are uncannily tethered to interconnectedness and thresholds. This is a remarkable, keen debut.” —Eduardo C. Corral

“A tapestry woven with myth, sorrow, wonder, and the odd pharmaceutical, In an Invisible Glass Case Which Is Also a Frame presents to us its world: a world we tilt our head to recognize, a world at once quotidian and shimmering and darkly strange. With intelligence, grace, and an understated humor, Julia Guez investigates the fabric of our being, and puts words to the uneasy peculiarity of being alive. ‘Have we made it across the vast plain of night?’ asks one poem. We have not: even the day feels night here, as the poems unfold in the dim shadow of the unquiet mind’s gloaming. But even as an animal sadness stalks us from page to page, the poems chart a course forward toward a pinpoint of warm light, and the promise of something beautiful.” —Camille Rankine

"In this direct and imaginative debut, Guez weaves disparate images to grapple with the stages of modern life....This expansive debut helps readers to see the world and the stages of life afresh."
— Publishers Weekly

"...At once moody and meditative, cheeky and bright, Guez’s poems will satisfy many readers, matching their own sense of upheaval."
— Barbara Hoffert