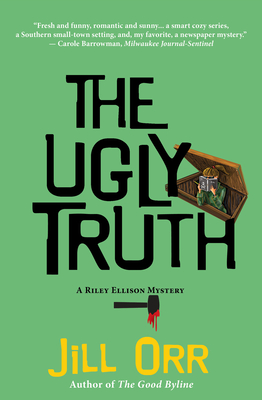 By Jill Orr
$16.00
NOT on our shelves now. Usually ships 1-10 business days from warehouse. ETA will be updated with email order confirmation.

This is book number 3 in the Riley Ellison Mysteries series.

There's been a shocking double murder in Tuttle Corner, Virginia, involving high-profile players from Washington D.C. This brings national attention--and big-city competition for the story--to junior reporter Riley Ellison's little corner of the world. Beloved caf owner Rosalee is the prime suspect in the violent crimes, but she insists on her innocence. In exchange for protection, Rosalee gives Riley and her fellow reporter Holman exclusive information that incriminates a powerful person. Meanwhile, Personal Romance Concierge(TM) Regina H. is back, offering once-again-single Riley not just online dating expertise but also a new subscription self-care service that promises such benefits as "the sensation of emotional bravery on a micromolecular level." Riley and Holman eventually begin to wonder if Rosalee is telling the truth. They head down separate investigative paths until one of them finds the truth... and one of them finds the killer. This third installment in the Riley Ellison mystery series is rich with all the suspense, humor, small-town charm, and captivating characters that made the first two books a hit with critics and fans alike.

Jill Orr is a the author of The Good Byline and The Bad Break. She lives in Columbia, Missouri, with her husband and two children.