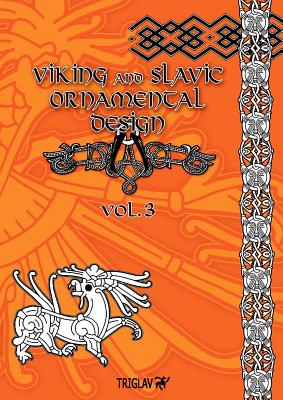 This volume is based on three pillars - photos, new publications and the Internet. The author has constructed Volume III of the Viking and Slavic Ornamental Design with a new set of 266 or so ancient designs.

There In recent years, mass culture has started to focus of the Slavs. The growing importance of re-enactment for the history and archeology also played a role in this. Increased contact between East and West of Europe in various academic fields, including historical sciences, has given us a better understanding of this era.

This volume is based on three pillars - photos, new publications and the Internet. The author has constructed Volume III of the Viking and Slavic Ornamental Design with a new set of 266 or so ancient designs. The first group in the collection includes beautifully decorated wooden Viking objects.  Many of these come from the Irish capital and the local ornamental style. The second group includes items from the Norwegian Museum of Cultural History in Oslo. Thematically, and you will find a large amount of ornamentation in the Borre style. This time, there is new material from the tombs in Mammen, the embroidered and woven patterns from Oseberg and the embroidery of Russia. Piquant, two very well-known weather vanes provided a certain amount of ornaments.

As always, this is present in two-dimensional graphics in black and white, allowing the broadest possibilities. The logic of the system has not changed, focusing on the concept of the style, dating or borne symbolism.

Igor Gorewicz was born in 1976 in Szczecin, Poland. In 2000 he graduated from the Institute of Political and Social Sciences of the University of Szczecin.

Since 1999, he has published dozens of popular science, scientific and journalistic articles in the history and archeology of the Slavs, military history, historical reconstruction, Slavic mythology, history of ideas, religious studies, culture and politics (including Focus, From the Abyss of the Ages, Mare Integrans , Archeologia Zywa, Gazeta Rycerska, Pro Memoria, Zachodniopomorski Wanderer, State and Society and others).

Founder (1998) and leader of the Gródu Trzyglowa Team - an association dealing with the reconstruction and popularization of the Slav culture - which cooperates with scientific and museum centers in the field of historical reconstructions, exhibition preparation, organization and running of historical festivals. In this capacity, he presented the culture of the Slavs throughout Poland and on many occasions in Denmark, Germany, the Netherlands, Sweden, Norway, England, Estonia, the USA, India, Italy, Iceland and Lithuania. He is likewise the founder and artistic director of historical festivals.

In addition, he is a publisher, producer, musician, film and theater consultant, fight director (he took part in almost twenty film productions). Author of educational exhibitions, including the "World of Slavs and Vikings" and "Swords of Europe" shown by museums throughout the country.

He is the author of the following books:

Ornamentation of the early Middle Ages, with the addition of the Rus. Szczecin 2009

Viking and Slavic Ornamental Design vol. I, Szczecin 2009 and subsequent editions of

Borek and the Slavonic Gods, Szczecin 2014