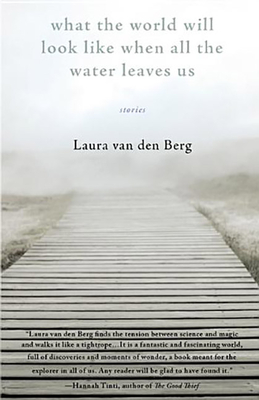 The stories in Laura van den Berg's rich and inventive debut illuminate the intersection of the mythic and the mundane: A failed actress takes a job as a Bigfoot impersonator. A botanist seeking a rare flower crosses paths with a group of men hunting the Loch Ness Monster. A disillusioned missionary in Africa grapples with grief and a growing obsession with a creature rumored to live in the forests of the Congo. And in the title story, a young woman traveling with her scientist mother in Madagascar confronts her burgeoning sexuality and her dream of becoming a long-distance swimmer. Rendered with precision and longing, the women who narrate these starkly beautiful stories are consumed with searching--for absolution, for solace, for the flash of extraordinary in the ordinary that will forever alter their lives.

Laura van den Berg was raised in Florida and earned her M.F.A. at Emerson College. Her first collection of stories, What the World Will Look Like When All the Water Leaves Us(Dzanc Books, 2009), was a Barnes & Noble "Discover Great New Writers" selection. Her second collection of stories, The Isle of Youth, , published by Farrar, Straus & Giroux in November 2013, won the Rosenthal Family Foundation Award from the American Academy of Arts & Letters and The Bard Fiction Prize, and was named a "Best Book of 2013" by over a dozen venues, including NPR, The Boston Globe, and O, The Oprah Magazine. Both collections were shortlisted for the Frank O'Connor International Short Story Award. Her first novel, Find Me, is out from FSG in February 2015. The recipient of a 2014 O. Henry Award, Laura currently lives in the Boston area and is a Writer-in-Residence at Bard College.