WHY SCIENCE IS WRONG...About Almost Everything (Hardcover) 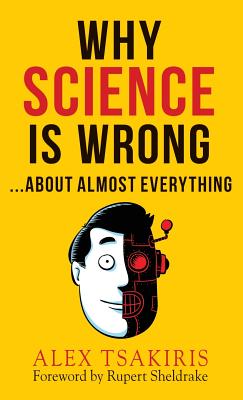 Alex Tsakiris has interviewed many bestselling authors and dozens of world-class academics on his popular science podcast Skeptiko.com. In this book he shares with us what he's learned through his 200-plus interviews with some of the world's leading consciousness researchers and thinkers. In doing so, he reveals what the best research is saying about 'big picture' science questions and the limits of science in general. What's he's learned, in short, is that science-as-we-know-it is an emperor-with-no-clothes-on proposition. It mesmerizes us with flashy trinkets, while failing at its core mission of leading us toward self-discovery. Science is wrong about almost everything because science depends on our consciousness being an illusion-and it's not

ALEX TSAKIRIS is a successful entrepreneur turned science podcaster. In 2007 he founded Skeptiko.com, which has become the #1 podcast covering the science of human consciousness. Alex has appeared on syndicated radio talk shows both in the US and the UK. He lives in Del Mar, California.