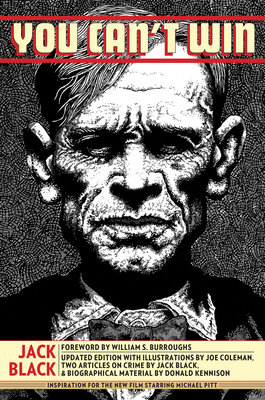 At last! My bookselling days are now complete! With AK Press reissuing my favorite book of all time, I can ride the rails into the sunset, as my "want list as long as my arm" customers can buy a new copy of this and not have to wait for a rare, OP copy to stumble in. Much more than crime, much more than an autobiography of San Francisco's greatest hobo thief, You Can't Win is an entertaining, engrossing testament to an era very long gone. Masterful!

You Can't Win, the beloved memoir of real lowdown Americana by criminal hobo Jack Black, was first published in 1926, then reprinted in 1988 by Adam Parfrey's Amok Press, featuring an introduction by William S. Burroughs.

After its Amok Press edition went out of print, You Can't Win found popularity once again with the AK Press edition.

Feral House's new version will take this classic American narrative a lot further, including two remarkable nonfiction articles by Jack Black written for Harper's Magazine in the 1920s. Remarkable illustrations by Joe Coleman and new biographical revelations by Donald Kennison will round out the new edition.

A full-length feature film of You Can't Win starring Boardwalk Empire's Michael Pitt is expected to be released in spring 2013.