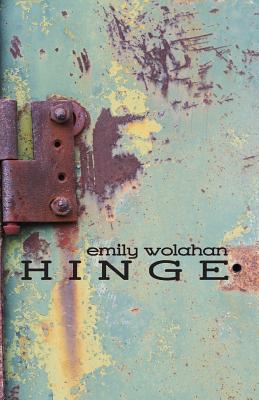 By Emily Wolahan
Not available to order

Hinge is a book fixated on contingency and what it might mean to live in it. These meditative lyrics are radically, at times painfully aware that anything could happen .... This awareness walks hand in hand with Wolahan's almost preternatural sensitivity to cause and effect, the syntax of the physical and the interplay of the parts that make up any given whole. More than any younger poet I can think of, Wolahan is attuned to the engineering of the world she walks through as well as to the musical possibilities it suggests ....Hinge is a startlingly mature, refined debut. - Timothy Donnelly Presiding over Hinge is a fierce and forwandering intelligence, one that preserves the traces of its coming to consciousness of all that surrounds it and that it surrounds. These poems know that something is exchanged for apprehension, the way a wave removes part of what it reveals of the beach that understands it.... - Jane Gregory Emily Wolahan accounts for the delicate hinges between pronouns, and through this poet's attentive gaze, we see the seams between the known and unknown, the there, not yet there .... By simultaneously seeing and asking what is seen, Wolahan performs the stakes in the hinges .... - Michelle Taransky Emily Wolahan has lived in Britain, Hong Kong, Japan, Saudi Arabia, France, Italy, and America. She received an MA in Literature from University of Houston and an MFA in Writing from Columbia University. Her work has appeared in journals such as Gulf Coast, Boston Review, Omniverse, DIAGRAM, and Drunken Boat. She is also co-founder and co-editor of JERRY Magazine. She now lives with her husband and two children in San Francisco, where she teaches writing.