Swim Through the Darkness: My Search for Craig Smith and the Mystery of Maitreya Kali (Paperback) 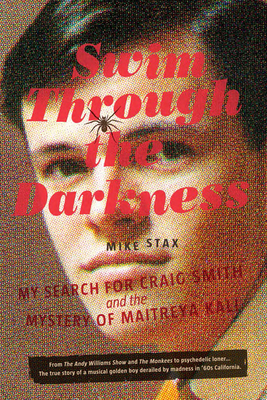 Craig Smith was a 1960s golden boy - good looking, charismatic, outgoing; a preternaturally gifted musician and songwriter whose songs were recorded by some of the biggest names in entertainment - Andy Williams, Glen Campbell, the Monkees. His future success seemed assured, until an unexpected turn of events plunged him into a terrifying darkness. Clean-cut Craig Smith became Maitreya Kali, the self-proclaimed psychedelic Messiah. He laid out his poignant, disturbing schizophrenic vision on a sprawling self-released double-album before disappearing completely. Author Mike Stax spent fifteen years piecing together the mystery of Maitreya Kali, uncovering one of the strangest and most tragic untold stories of the 1960s and '70s. Swim Through the Darkness reveals author Stax's fifteen year quest in tracking down this strange saga of American pop culture. Included in the story are Smith's close ties to the Monkees, particularly Mike Nesmith, who produced and promoted Smith's band, Penny Arkade. Also covered are the bizarre self-released albums he made as Maitreya Kali, which now command thousands of dollars among psychedelic music collectors. Purchasers of this book will also receive a code to be able to download Smith's music in all its obscure and variant styles.

Mike Stax: Editor of the highly respected '60s/'70s music magazine, Ugly Things. He has written liner notes for hundreds of reissues, and contributing to other publications, including the Oxford American and Shindig, and has also co-authored two books, Don't Bring Me Down...Under (with Andy Neil and John Baker) and Like, Misunderstood (with Rick Brown). Since 1983 UGLY THINGS magazine has brought its readers unparalleled coverage of WILD SOUNDS FROM PAST DIMENSIONS: the best lost, unknown and overlooked music of the 1960s and beyond. Published three times a year, each issues features 160-200 pages of in-depth features, exclusive interviews, rare photos and more, as well as a massive review section sifting through hundreds of vinyl and CD reissues, music-related books and DVDs. UGLY THINGS is not a hobbyist publication for trainspotting elitists, it is a high energy rock & roll fanzine about the music and the stories of the people that made it happen.UT RECORDS was started as a sideline to the magazine, presenting high quality vinyl and CD releases of rare and previously unreleased garage, beat and psychedelia from the 1960s.