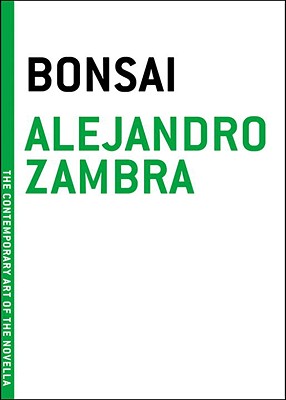 By Alejandro Zambra
$13.00
Email or call for price.

Once outside its flowerpot, the tree ceases to be a bonsai.

The Contemporary Art of the Novella series is designed to highlight work by major authors from around the world. In most instances, as with Imre Kertész, it showcases work never before published; in others, books are reprised that should never have gone out of print. It is intended that the series feature many well-known authors and some exciting new discoveries. And as with the original series, The Art of the Novella, each book is a beautifully packaged and inexpensive volume meant to celebrate the form and its practitioners.

Alejandro Zambra is acclaimed as the greatest writer of Chile's younger generation. He is a poet and critic and currently teaches literature at the Diego Portales University in Santiago. "Bonsai" is his first novel. It was awarded Chile's Literary Critics' Award for Best Novel.

"The ‘last truly great book’ I read has to be Alejandro Zambra’s Bonsai. A subtle, eerie, ultimately wrenching account of failed young love in Chile among the kind of smartypant set who pillow-talk about the importance of Proust. You get the cold flesh of the story in that chilling first line: “In the end she dies and he remains alone, although in truth he was alone some years before her death.” But only by reading to the end do you touch the story’s haunted soul. A total knockout.
—Junot Díaz, author of The Brief Wondrous Life of Oscar Wao

"The herald of a new wave of Chilean fiction."
—Marcela Valdes, The Nation

"Bonsai is an appealing miniature, a novella that, despite its brevity, feels airy and full … an enjoyable, pleasantly surprising, and clever read."
—The Complete Review

"Bonsai won the Chilean Critics Award for best novel of the year in 2006…and it's easy to understand why."
—Jonathan Messinger, Time Out Chicago

"Undeniably fascinating...the kind of story that lingers in the mind for weeks after being read."
—The Quarterly Conversation