When Your Sky Runs Into Mine (Paperback) 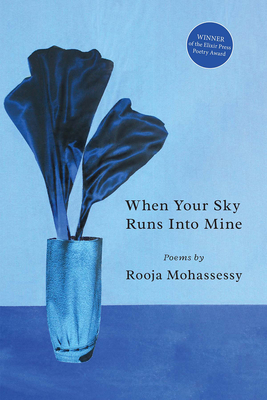 WHEN YOUR SKY RUNS INTO MINE by Rooja Mohassess is the winner of the 22nd Annual Elixir Press Poetry Award. Shara McCallum had this to say about it: "Rooja Mohassessy's debut collection, When Your Sky Runs Into Mine, belies any notion of a first book. It is a work of expansive vision and formal achievement, sounding an assured and unforgettable voice in poetry. Ekphrasis is at the core of Mohassessy's poetics, resplendent in her responses to works of visual art and in the richly textured images she creates with intricate diction and syntax. A memoir-in-verse, When Your Sky Runs Into Mine, spans three continents and four decades. The opening section is set in the Tehran of the narrator's childhood, overlaid by the Iranian Revolution. The poems arc seamlessly between the child's view of this world and the vantage point of the adult looking back. They shift masterfully between the singular first-person 'I' and the collective voice of the women, the plural 'we' for whom the poet is witness. The book's second and third sections carry us from Geneva to Rome, from Shanghai to Northern California, encompassing the narrator's and other family members' multiple migrations and exile. Throughout, Mohassessy is unflinching in her reckoning with the long-reaching arm of violence and with ongoing, dehumanising views of immigrants and women. The figurative country of Mohassessy's book is a woman's body and soul--and in these piercingly timely and timeless poems, Mohassessy reveals the claims a woman must make to both to fully inhabit herself."

"In Rooja Mohassessy's debut collection, When Your Sky Runs Into Mine, her intellectual power and penchant for image stand out in beautiful ways. In her poems, she displays a painterly use of color, texture, and image that reflects her striking awareness of the physical world. Her capacity for efficient and elegant syntax and her fierce intelligence when dealing with political subjects and subjects of the female body in this world, constitute a most welcome addition to American poetry. This is a very impressive debut collection by a most promising poet."--Kwame Dawes author of UnHistory with John Kinsella