What Makes the Monkey Dance: The Life And Music Of Chuck Prophet And Green On Red (Paperback) 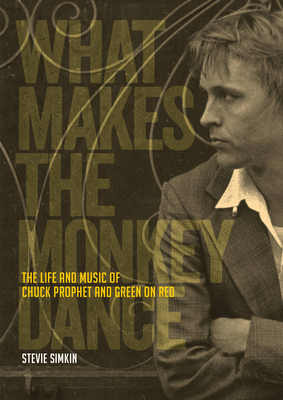 By Stevie Simkin
$22.95
ON HAND in at least ONE of our stores. Click through or call for up-to-the-minute availability.

"How do you define success? If you let somebody else define what success is, you’re a sucker. I’m no sucker."

Chuck Prophet started out as a post-punk California kid who helped kick-start the alt-country genre when he joined Dan Stuart’s Green On Red, then making a name for themselves as part of the so-called Paisley Underground alongside bands like The Dream Syndicate and The Bangles. While Green On Red established a reputation for self-destruction illuminated by flashes of brilliance in the studio and on festival stages around Europe in the late 1980s, Prophet simultaneously immersed himself in roots music and forged a solo career via backroom and basement venues across his adopted home of San Francisco. He has emerged as one of the most respected musicians of his generation, admired for his talents as a songwriter, guitarist, vocalist, and live performer. He has worked with the likes of Tony Visconti and Warren Zevon, and his songs have been performed by artists as diverse as Bruce Springsteen and Solomon Burke.

Those who know him through his social-media presence or his live shows are well aware that no one tells a story quite like Chuck Prophet; here, his voice rings clearly from the first page to the last as he gives his perspective on writing, recording, and performing, and talks candidly about his struggles and remarkable recovery from years of addiction. As Prophet’s official archivist, author Stevie Simkin draws on over a hundred hours of interviews with his subject, as well as contributions from fellow musicians, producers, friends, and associates, and unique access to unreleased songs and live recordings and scores of previously unseen photographs. Time and again, Simkin puts the reader in the room with Chuck as he talks, or in the studio as he plays, and the live experience is captured from both sides of the stage monitors.

An exciting rock’n’roll odyssey, What Makes The Monkey Dance is essential reading for every fan of this phenomenal artist, but also for anyone with an interest in alternative music during a period seismic change, offering a fascinating portrait of how a true artist has managed to carve out a career at the sharp end of a notoriously ruthless industry."

Stevie Simkin (MA, PhD) is Reader in Drama and Film at the University of Winchester, England. He is the author of seven books and numerous articles and book chapters about theatre, cinema, and popular music. He is Chuck Prophet’s official archivist and is currently assisting with a reissue program due to begin in 2020.