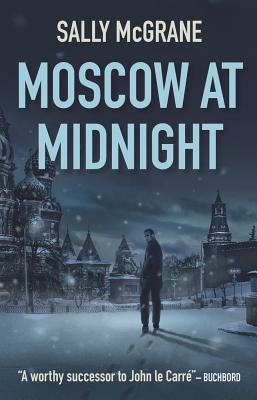 By Sally McGrane
Email or call for price
Backordered

Downsized by the CIA, Max Rushmore is re-hired by a private contractor—operating on a tightened budget in a world of ratcheting tensions—to return to Moscow and investigate the death of a beautiful nuclear waste disposal expert. But Max, whose non-transferable skills include never having met a Russian he couldn’t drink under the table, soon uncovers all sorts of inconsistencies: could it be that she is not dead at all? So begins a game of cat-and-mouse that takes the agent across Russia as he follows his only clue: a rare Siberian diamond. With all the breathless tension of classic espionage novels, Moscow at Midnight is both humorous and utterly enthralling—a fast-paced page-turner of the old school.

Sally McGrane was born in Berkeley, California, but has lived in Berlin for the last decade. She writes about the culture, business, politics, and science of Western Europe, Russia, and Ukraine for the New York Times, New Yorker, Die Zeit, Monocle, and other publications.

"Great! Tense right up to the final page . . . A multi-layered, thrilling novel that is difficult to resist and hard to put down, even at the end." —Süddeutsche Zeitung

"Sally McGrane’s fantastic debut is a commentary on the madness of Russia, in general—and Moscow, in particular." —Die Welt

"Everyone's talking about Russia but this is a book that really takes you there, a crime thriller with a truly documentary eye, full of insights about Russian people, politics and culture- while never failing to intrigue and excite." —Peter Pomerantsev, author of Nothing is True and Everything is Possible