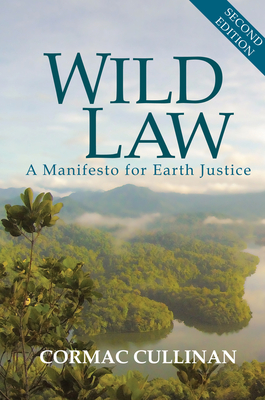 Wild Law fuses politics, legal theory, quantum physics and ancient wisdom into a fascinating story. It has been seminal in informing and inspiring the global movement to recognise rights for Nature – a movement destined to shape the twenty-first century as significantly as the human rights movements shaped the twentieth century. This revised edition includes a new preface, postscript and the Universal Declaration of the Rights of Mother Earth proclaimed on 22 April 2010.

Wild Law presents a vision of how we could transform the systems that structure and order industrialised societies to enable us to rediscover a viable role for our species within the Earth community. It reveals how the goverance systems of today legitimise and promote the disastrous expolitation and destruction of Earth. The author explains how to begin transforming these systems to ensure that the pursuit of human well-being enhances the beauty, health and diversity of Earth instead of diminishing it.

Wild Law describes an Earth-centred approach to ordering human societies (Earth jurisprudence), how to apply it, and it's emerging role as a common manifesto for promoting social and environmental justice, the conservation of biological and cultural diversity, animal rights and welfare, and green spirituality.

Cormac Cullinan is an author, practicing environmental attorney, and governance expert who has worked on environmental governance issues in more than twenty countries. He is a director both of Cullinan and Associates, Inc., a specialist environmental and green-business law firm, and the governance consultancy EnAct International.

At the invitation of Bolivia, Cullinan spoke at the 2009 Climate Change Conference in Copenhagen and led the drafting of the Universal Declaration of the Rights of Mother Earth, which was proclaimed on April 22, 2010, by the People’s World Conference on Climate Change and the Environment in Bolivia.

In September 2010, Cullinan played a leading role in establishing a Global Alliance for the Rights of Nature and currently sits on the Executive Committee of the Alliance. Cullinan is also a research associate of the University of Cape Town, sits on the City of Cape Town’s climate-change think tank, and is a nonexecutive director of ICLEI Africa. He lives in Cape Town, South Africa.

“Every now and then, an idea emerges that helps the human species to evolve. Wild Law is one such idea and is brilliantly explained in this book. Cormac Cullinan leads us toward a new relationship with Mother Earth – just in time.”

“Even in an age that feels itself to be enlightened and humane, and condemns cruelty to animals, and claims to take “the environment” seriously, the idea of “Wild Law” still seems, to many, to be bizarre. How can wild creatures, or landscapes, be granted the same kind of respect – the same rights – in law, as a human being? Yet, as Cormac Cullinan argues so powerfully, the morality of this is clear, and the logic of the case seems impeccable. Indeed we should be asking, can we claim to be fully civilized in the absence of such laws?”

- - Colin Tudge - author of 'The Secret Life of Trees'

"This book of Cormac Cullinan explains with great clarity how we can change our entire approach to governance so that we can continue life on a liveable planet. In its basic outlines this book is one of the finest contributions to the entire field of jurisprudence in recent times."

- - Thomas Berry - author of 'The Dream of the Earth', 'The Universe Story' and 'The Great Work'

"Wild Law is a stimulating, eminently readable response to our governance crisis. The survival of our species and health of the Earth family depends on our ability to transform governance systems so that humans become part of the ecological matrix of biological and cultural diversity. This book is a milestone on that path."

- - Dr Vandana Shiva - President of the Research Foundation for Science, Technology and Ecology

"The arrogance of the 'civilised' world has blinded it to the wisdom of the wisdom of the indigenous people for too long. Cormac Cullinan's call for the indigenous voices and the wisdom of thousands of years of human experience to be heard in the heart of our governance systems is both timely and powerful. This provocative and groundbreaking book is an important milestone in the process of finding a viable ecological role for contemporary human societies."

"We desperately need some new thinking today about systems of global governance. We're stuck with the same obselete, ignore-the-earth institutions that were brought into being after the 2nd World War, and they're now failing is ever more catastrophically. Wild Law shows just how radical we now need to be in creating new institutions that are genuinely 'fit for purpose' in the 21st Century.

- - Jonathon Porritt - Director of Forum for the Future

"We urgently need to rethink our legal and political systems if we are to stop environemntal destruction. The radical ideas in Wild Law will give both lawyers and grass-root activists the tools they need to start the process."

"Wild Law is to law what quantum physics is to physics."