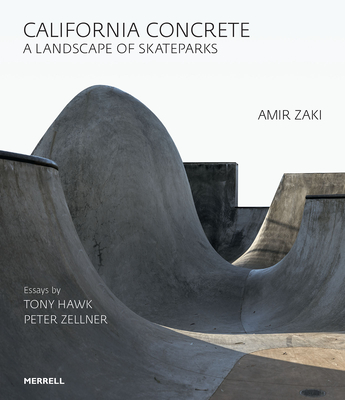 Southern California is the birthplace of skateboard culture and, even though skateparks may be found worldwide today, it is where these parks continue to flourish as architects, engineers and skateboarders collaborate to refine their designs. The artist Amir Zaki grew up skateboarding, so he has an understanding of these spaces and, as someone who has spent years photographing the built and natural landscape of California, he has a deep appreciation of the large concrete structures not only as sculptural forms, but also as significant features of the contemporary landscape, belonging to a tradition of architecture and public art.

To capture the images in this book, Zaki photographed in the early-morning light, climbing inside the bowls and pipes while there were no skaters around. Each photograph is a composite of dozens of shots taken with a digital camera mounted on a motorized tripod head. The resulting images are incredibly high resolution and can be printed at a large scale with no loss of detail. Their look is unusual in that Zaki's lens is somewhat telephoto, which has the effect of flattening space, yet the angle of view is often quite wide, which exaggerates spatial depth. The technology also allows Zaki to photograph certain areas from difficult positions that would otherwise be impossible to capture. Zaki makes the point that, by climbing deep inside these spaces, the visual experience is fundamentally different from viewing them from outside. In his text, Tony Hawk - one of world's best-known professional skateboarders - describes how Zaki's photographs of empty skateparks and open skies evoke memories of the idyllic freedom and the sense of potential that he felt when he first visited a skatepark as a child and saw skaters flying like birds in and out of the concrete pools and bowls.

Hawk has skated in some of the parks featured in this book, and for him several of Zaki's images, taken from the skater's perspective, recall the experience of trying to learn a particular trick. A beautiful full pipe that looks like a barrelling wave may be, for Hawk and other seasoned skateboarders, a perfect example of function and form fitting together flawlessly in a well-designed skatepark. In his essay, the Los Angeles-based architect Peter Zellner offers a different perspective. Skateparks are made by excavating large open areas of land within city parks. The forms inside them may represent ocean waves, mountainous terrain and other features from nature, but they are permanently frozen in cement like Brutalist architecture. Every shape, line, transition, hip, tombstone, coping, stair, flow, tile, bowl, pipe, spine, rail, ledge, roll-in, kidney, clover, square and bank serves a specific purpose - to provide a challenging thrill and maximum pleasure for the rider. In this sense, skateparks epitomize function over form. In Zaki's mesmerizing photographs, however, these concrete landscapes suggest a more complex and integrated relationship with the history of design and architecture in Southern California.