A History of Islam in 21 Women (Hardcover) 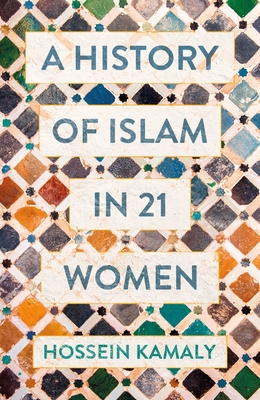 By Hossein Kamaly
$24.95
ON HAND in at least ONE of our stores. Click through or call for up-to-the-minute availability.

Khadija was the first believer, to whom the Prophet Muhammad often turned for advice. At a time when strongmen quickly seized power from any female Muslim ruler, Arwa of Yemen reigned alone for five decades. In nineteenth-century Russia, Mukhlisa Bubi championed the rights of women and girls, and became the first Muslim woman judge in modern history. After the Gestapo took down a Resistance network in Paris, British spy Noor Inayat Khan found herself the only undercover radio operator left in that city. In this unique history, Hossein Kamaly celebrates the lives and achievements of twenty-one extraordinary women in the story of Islam, from the formative days of the religion to the present.

Hossein Kamaly is Associate Professor of Islamic Studies at Hartford Seminary. A scholar of the Middle East, focusing on the history of ideas, he has previously taught at Barnard College and Columbia University, and is the author of God and Man in Tehran. He lives in New York.

‘Here in all their gutsy glory are women whose voices have not received the prominence that is their due within the story of Islam… A History of Islam in 21 Women is an act of reclamation on several fronts. For Muslim women, it provides an empowering and exhilarating genealogy of strong forebears whom they can connect to their contemporary journeys of empowerment. For Western readers, it exposes the untruths that have characterized Muslim women as deferential beings in need of rescue.’
— New York Times

‘Resurrecting a history that has been repeatedly bludgeoned, exploited and buried.’
— Middle East Eye

‘Kamaly skilfully and sensitively negotiates the matrix of history, gender and language through the lived realities of 21 remarkable Muslim women. The result is a rich, vibrant and meticulously researched exposition that instinctively unpacks the intersectional context Muslim women have occupied from the sixth century to the present day.’
— Critical Muslim

‘[A] solid starting reference for those interested in women and Islamic studies, accessible and well-suited for both high school and college-level readers.’
— Library Journal

‘In the same format as author Jenni Murray’s similarly titled books on women in British and world history, Islamic studies scholar Kamaly presents capsule biographies of his choices of 21 women significant in the world of Islam…a straightforward history-in-portraits.’
— Booklist

‘With grace and erudition, Kamaly vividly captures key moments in the long and varied history of the Muslim world, bringing to life some of the extraordinary women…who made that history and transformed our world.’
— Lila Abu-Lughod, Joseph L. Buttenwieser Professor, Columbia University, and author of Do Muslim Women Need Saving?

‘In a highly readable and engaging book, Hossein Kamaly invites us to rethink the history of Islam by narrating the lives and achievements of twenty-one remarkable women, from the birth of the religion to the present. This is a much-needed corrective to conventional masculinist Muslim history.’
— Ziba Mir-Hosseini, Professorial Research Associate, SOAS, University of London

‘This book takes readers on a thrilling journey into the lives of twenty-one women in Islamic history. In tightly written, lucid, and highly readable chapters, Kamaly offers an informative and rich survey of some of the key women who crafted and shaped the history of Islam from its very foundations to our modern age. This book is a rich source for any reader interested in the history of Islam, and it should be required reading in any introductory course on Muslims and their religion or culture.’
— Khaled Abou El Fadl, Omar and Azmeralda Alfi Distinguished Professor in Islamic Law, UCLA School of Law