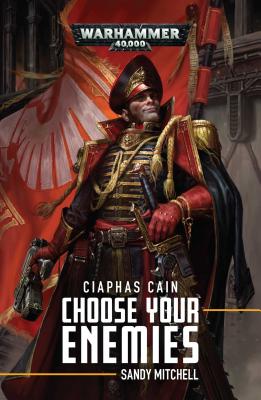 This is book number 10 in the Ciaphas Cain series.

Book 10 in the Ciaphas Cain Series.

Commissar Ciaphas Cain returns! After putting down an uprising on a mining world, he finds evidence that the corruption might have spread to other planets, and the forge world of Ironfound could now be at risk…

It's been a long time, but the self-styled Hero of the Imperium is back in action! And he's doing what he does best – telling tall tales of his unlikely exploits.

Commissar Ciaphas Cain and the Valhallan 597th are in the thick of it again, putting down an uprising of Chaos cultists on an Imperial mining world. Though their mission is a success, they find evidence that the corruption might have spread to other planets, and that the forge world of Ironfound could now be at risk. The munitions Ironfound produces are vital to the Imperial war effort in the subsector; its safety must be assured at all costs. As battle explodes across the planet, Ciaphas Cain and his regiment come up against allies and enemies old and new in their fight for victory against the forces of Chaos.

Sandy Mitchell is the author of a long-running series of Warhammer 40,000 novels about the hero of the Imperium, Commissar Ciaphas Cain. The most recent book in that series is The Greater Good, and there is also the audio drama Dead In The Water. He has also written a plethora of short stories, including 'The Last Man' in the Sabbat Worlds anthology, along with several novels set in the Warhammer World. He lives and works in Cambridge.