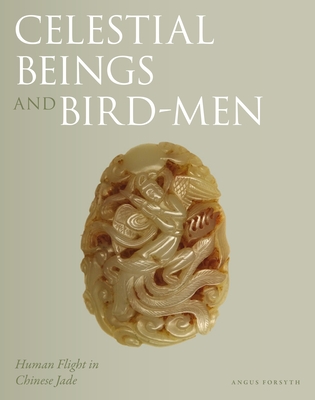 By Angus Forsyth
$55.00
NOT on our shelves now. Usually ships from warehouse in several days.

A sequel to Ships of the Silk Road, this is an informed and beautifully illustrated treatment of flying men in Chinese jade.

Jade figurines depicting human flight are a varied and expressive manifestation of this most prized artistic medium. Angus Forsyth, a prominent collector of Chinese jade, in this book explores the making in the Middle Kingdom (over a 2000-year period, from the Han Dynasty onwards) of unique objects depicting figural movement through the air. He examines the depiction of apsaras (flying angels), kinnaras (man-birds), anthropomorphized bird headdress ornaments and finally garudas (humanoid birds appearing in both Hindu and Buddhist mythology). He shows how these flying figures came to be associated with veneration of the gods and specific devotional practice. Examining a variety of representative objects, none of which has been seen in print before, the author reveals that the original concept behind flying celestial beings and bird-men originated not in China but in India and the Christianized West, via the Silk Road. A distinctive characteristic of Chinese artefacts is that, in contrast to their Western angelic counterparts, they often are wingless. The book discusses small and larger jade pieces alike.

Angus Forsyth is an internationally respected collector of, and authority on, Chinese jade. He is also a former president of the Oriental Ceramics Society of Hong Kong.