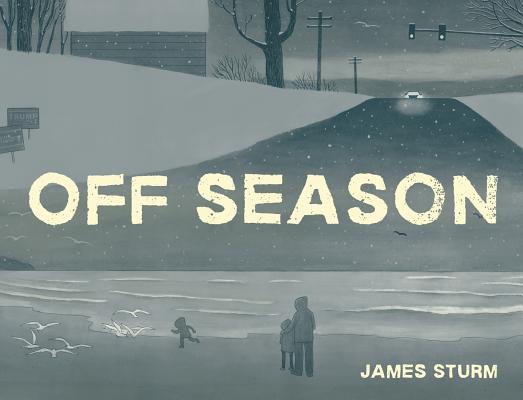 Rage. Depression. Divorce. Politics. Love. A visceral story that you can see, taste, and feel.

How could this happen? The question of 2016 becomes deeply personal in James Sturm’s riveting graphic novel Off Season, which charts one couple’s divisive separation during Bernie Sanders’s loss to Hillary Clinton, Clinton’s loss to Donald Trump, and the disorienting months that followed.

We see a father navigating life as a single parent and coping with the disintegration of a life-defining relationship. Amid the upheaval lie tender moments with his kids—a sleeping child being carried in from the car, Christmas-morning anticipation, a late-night cookie after a temper tantrum—and fallible humans drenched in palpable feelings of grief, rage, loss, and overwhelming love. Using anthropomorphized characters as a tactic for tempering an otherwise emotionally fraught situation, Off Season is unaffected and raw, steeped in the specificity of its time while speaking to a larger cultural moment.

A truly human experience, Off Season displays Sturm’s masterful pacing and storytelling combined with conscious and confident growth as the celebrated cartoonist and educator moves away from historical fiction to deliver this long-form narrative set in contemporary times. Originally serialized on Slate, this expanded edition turns timely vignettes into a timeless, deeply affecting account of one family and their off season.

James Sturm is the author of several award-winning graphic novels for children and adults, including James Sturm’s America, Market Day, The Golem’s Mighty Swing and Satchel Paige: Striking Out Jim Crow. He is also the founder of the Center for Cartoon Studies and the National Association for Comics Art Educators.  He created Adventures in Cartooning with collaborators Alexis Frederic-Frost and Andrew Arnold. Sturm, his wife, and two daughters live in White River Junction, Vermont.

One of the New York Public Library’s Best Books of 2019!

“Off Season is a revelation… The soulful faces of Sturm’s nonhuman, all-too-human characters ask us to withhold judgment, hear out the other sides of the story.”—The New York Times

“Off Season’s subject is estrangement, political and emotional [yet] there is a sweetness here that both mitigates against the story’s existential sadness and deepens it, somehow. It democratises Sturm’s characters and, in doing so, reminds the reader at every turn that the US is growing ever less fair almost by the minute.”—The Guardian

“The ache of a specific sort of masculine longing and restraint is powerfully articulated [in Off Season,] a book that feels true to the current moment.”—The Boston Globe

“In sombre, grey-blue tones, Sturm captures the wintry, desolate mood of a world with Donald Trump ascendant. Powerless to effect change, facing down foreclosed futures, everyone in Sturm’s book feels, as the President is so fond of saying, ‘like a dog.’”—The Globe & Mail

“At the heart of the book, the humanism of the relationships and their aura of palpable hopelessness and also of lingering hope, rings with a gut-wrenching consistency.”
—The San Francisco Chronicle

“The unadorned style of Sturm’s drawing contributes to the book’s emotional tug, focusing our attention on the characters rather than the world around them.”—The Financial Times

“As the troubled characters stagger from crisis to crisis as if punch-drunk, the country experiences its own separation. It’s grim stuff, mostly focused on a single father who just can’t get a break and is, frankly, an idiot. The subtext is plain, yet thought-provoking.”—The Toronto Star

“What could feel like yet another Trump voter apologist pastiche becomes something much deeper and harder to bear, about loss and lost time. It was one of the first graphic novels of 2019 that I read, and definitely on my list of the best this year.”—PEN America

“Sturm doesn’t make the entire book about the election, but he maintains a strong political undercurrent throughout, reinforcing how partisan allegiances impact personal interactions even when no one is talking about the government.”—The AV Club

“Off Season, is a wintry domestic drama set against an economic downturn and snow. Lots of snow. The result is a punchy, beautifully crafted story that suggests a country in an anxious place.”—The Scotland Herald