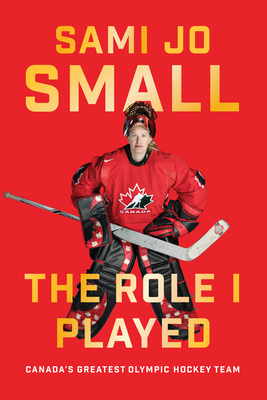 "Glimpses of her childhood and life outside of hockey come into view, but the main focus is the roller-coaster ride of striving to compete at the sport's top level." -- Library Journal "Sami Jo has an energetic personality that shines through with every story in this book." -- Jennifer Botterill, four-time Olympian Two-time Olympic gold medalist offers insider access, writing with unflinching honesty about the triumphs of her greatest games and the anguish of difficult times with the Canadian National Women's Hockey Team Men's hockey in Canada may hog the limelight, but interest in women's hockey has never been higher. The Role I Played is a memoir of Sami Jo Small's ten years with Canada's National Women's Hockey Team. Beginning with her experience as a rookie at the first-ever women's Olympic hockey tournament in Nagano in 1998 and culminating with Canada's third straight Olympic gold medal in Vancouver in 2010, the veteran goaltender gives the reader behind-the-scenes insight into one of the most successful teams in sports history. This book honours the individuals who sacrificed so much of their lives to represent Canada on a world stage and celebrates their individual contributions to the team's glory. While bringing the personalities of her teammates to life, Small takes the reader into the dressing rooms and onto the ice for an up-close glimpse into the ups and downs of athletes pursuing a sport's highest achievement.

Sami Jo Small is a three-time Canadian Olympic ice hockey goalie (two golds and one silver) and a five-time World Champion. A graduate of Stanford University in mechanical engineering, she now works as a Certified Speaking Professional, delivering messages on how to build successful teams as well as successful teammates. From Winnipeg, Manitoba, she now lives in Mississauga, Ontario.