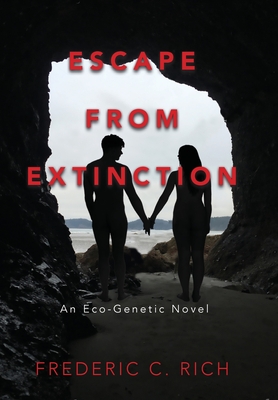 By Frederic C. Rich
$29.00
NOT on our shelves now. Usually ships from warehouse in several days.

As Escape from Extinction opens, the last Neanderthal dies in a cave on the Iberian Peninsula. 30,000 years later, the naturalist Muir O'Brien, hunting deep in the Oregon wilderness, spots a fern believed to be extinct since the end of the last ice age. His discovery leads to a life-changing encounter with the visionary and narcissistic Leo Bonelli, founder of the world's most successful biotech company. Despite misgivings, Muir and his daughter, Lilith, are drawn into Leo's world. When the truth about Leo's strange son, Ned, is revealed by a politically ambitious preacher, the world must grapple with the mystery of Neanderthal extinction and the true basis for human hegemony over the planet. Ned and Lilith, and all who love them, confront a tsunami of ignorance, fear, hatred, and violence.

Escape from Extinction is not science fiction. Scientists wielding new tools for editing DNA now have the power to change the blueprint for humanity, hack evolution, and even create entirely new forms of life. In Michael Crichton's Jurassic Park, the intersection of avarice and scientific hubris gave us man-eating velociraptors. Here, the "monster" is an empathetic and charming teenager, who many nevertheless believe presents the same threat to humanity as Crichton's dinosaurs.

Escape from Extinction features Rich's distinctive mix of graceful writing, deep intelligence, and narratives that engage his readers, both emotionally and intellectually, with topical issues.