Too Soon the Night: A Novel of Empress Theodora (Hardcover) 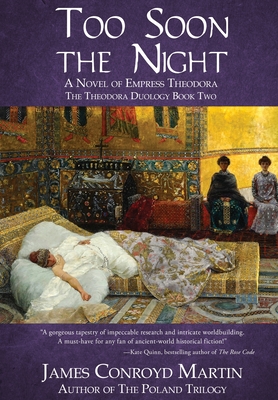 Palace eunuch and secretary Stephen records Empress Theodora's life as she navigates wars, political and religious crises, a citywide rebellion, and the first world plague pandemic, all in a male-dominated world. As the most powerful woman of the Byzantine Empire, one-time prostitute Theodora installs her own candidate for pope, legislates women's rights, and shuts down a massive riot, saving the empire.

In sixth century Constantinople, Theodora has become Empress of the Eastern Roman Empire. She has climbed from actress to prostitute to mistress to wife and equal partner of Emperor Justinian. As the most important woman in Byzantine history, she influences, religion, politics, and the laws that affect thousands. She is known for having installed her own papal candidate and for supporting policies and laws that favor women. In one decidedly brutal episode wherein the capital erupts in citywide rebellion, it is Theodora who saves the Theodora-Justinian regime. Theodora could have been the sixth century prototype for Eva Peron of Argentina.