Cuppy and Stew: The Bombing of Flight 629, a Love Story (Paperback) 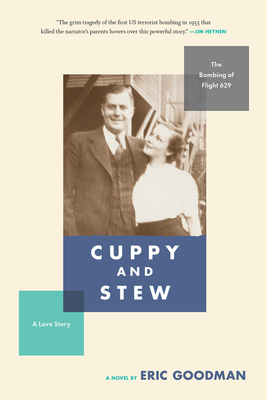 By Eric Goodman
$23.00
NOT on our shelves now. Usually ships from warehouse in several days.

Fiction. Memoir. In November, 1955, a young man in Denver, Colorado, hid twenty-five sticks of dynamite and a crude timer in his mother's suitcase. In what the FBI would term the first example of American air piracy, United Flight 629 blew up twelve minutes after taking off, killing everyone aboard. Part historical novel, part memoir, CUPPY AND STEW tells one family's story before and after the bomb went off. Narrated by a young girl whose parents died on Flight 629, CUPPY AND STEW evokes the not-so-innocent 1950s, and the struggles of Cuppy and Stew's daughters to survive their parents' deaths. Prize-winning novelist Eric Goodman's sixth novel is not only his most moving but also his most personal. His wife's parents perished on United 629.

"CUPPY AND STEW is completely natural, poignant, and riveting from the first page to the last. An easy read in the best sense of that phrase, and a major work of fiction."--Ron Hansen

"Eric Goodman's CUPPY AND STEW: THE BOMBING OF FLIGHT 629, A LOVE STORY reads like a fairy tale--until some pretty remarkable darkness sets in, as the title tells us it will. Part novel, part memoir (the author writes in the voice of his wife), part journalistic inquiry, the dark forests of this tale lead down to the far more treacherous and psychological underworld of the hero's journey--and a gritty, hard-earned climb back to the light. A most compelling read."--Sands Hall

"The grim tragedy of the first US terrorist bombing in 1955 that killed the narrator's parents hovers over this powerful story. Readers are given the complicated love story of the two who die on United Flight 629 and the moving struggle of the daughters who are orphaned by the tragedy: 'It was me and my sissy against the world.' CUPPY AND STEW brilliantly blends the known and the imagined and will stand as a model for new possibilities in historical fiction."--Jim Heynen

"Goodman's unconventional blend of fact and fiction will be a hit with historical readers who like stories about overcoming adversity."--Booklife