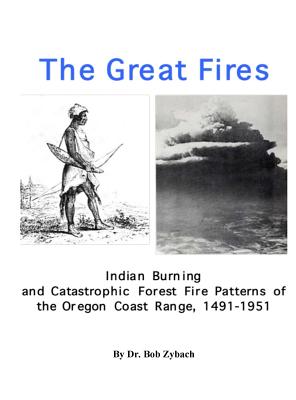 This study was designed to examine the relationship between land management practices of Indian communities prior to contact with Europeans and the nature or character of subsequent catastrophic forest fires in the Oregon Coast Range. The research focused on spatial and temporal patterns of Indian burning across the landscape from 1491 until 1848, and corresponding patterns of catastrophic fire events from 1849 until 1951. Archival and anthropological research methods were used to obtain early surveys, maps, drawings, photographs, interviews, Geographic Information Systems (GIS) inventories, eyewitness accounts and other sources of evidence that document fire history. Data were tabulated, mapped, and digitized as new GIS layers for purposes of comparative analysis. An abundance of useful historical evidence was found for reconstructing precontact vegetation patterns and human burning practices in western Oregon. The data also proved useful for documenting local and regional forest fire histories. Precontact Indians used fire to produce landscape patterns of trails, patches, fields, woodlands, forests and grasslands that varied from time to time and place to place, partly due to demographic, cultural, topographic, and climatic differences that existed throughout the Coast Range. Native plants were systematically managed by local Indian families in even-aged stands, usually dominated by a single species, throughout all river basins of the study area. Oak, filberts, camas, wapato, tarweed, yampah, strawberries, huckleberries, brackenfern, nettles, and other plants were raised in select areas by all known tribes, over long periods of time. However, current scientific and policy assumptions regarding the abundance and extent of precontact western Oregon old-growth forests may have been erroneous. This study demonstrates a high rate of coincidence between the land management practices of precontact Indian communities, and the causes, timing, boundaries, severity, and extent of subsequent catastrophic forest fires in the same areas. Information developed from this study will be of value to researchers, wildlife managers, forest landowners, and others with an interest in the history and resources of the Oregon Coast Range.