Black Death at the Golden Gate: The Race to Save America from the Bubonic Plague (Compact Disc) 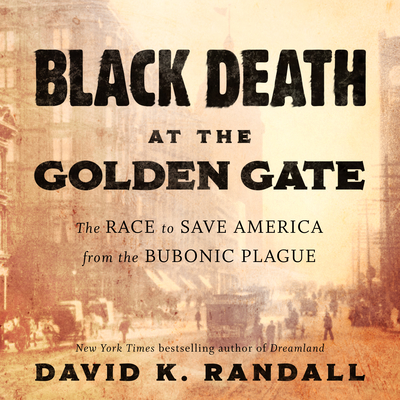 By David K. Randall, Charles Constant (Narrated by)
$34.99
NOT on our shelves now. Usually ships from warehouse in several days.

Black Death at the Golden Gate is a fast-paced, fascinating narrative of local history.  Centering on cases of The Plague in early San Francisco, it's a story about epidemiology, racism, public health versus individual rights, a burgeoning California, and bacteriology.  Don't let the "ologies" turn you off, though.  This is not too technical.  More just a lively history. —Pete

A spine-chilling saga of virulent racism, human folly, and the ultimate triumph of scientific progress. For Chinese immigrant Wong Chut King, surviving in San Francisco meant a life in the shadows. His passing on March 6, 1900, would have been unremarkable if a city health officer hadn't noticed a swollen black lymph node on his groin-a sign of bubonic plague. Empowered by racist pseudoscience, officials rushed to quarantine Chinatown while doctors examined Wong's tissue for telltale bacteria. If the devastating disease was not contained, San Francisco would become the American epicenter of an outbreak that had already claimed ten million lives worldwide. To local press, railroad barons, and elected officials, such a possibility was inconceivable-or inconvenient. As they mounted a cover-up to obscure the threat, it fell to federal health officer Rupert Blue to save a city that refused to be rescued. In the tradition of Erik Larson and Steven Johnson, bestselling author David K. Randall spins a spellbinding account of Blue's race to understand the disease and contain its spread-the only hope of saving San Francisco, and the nation, from a gruesome fate.