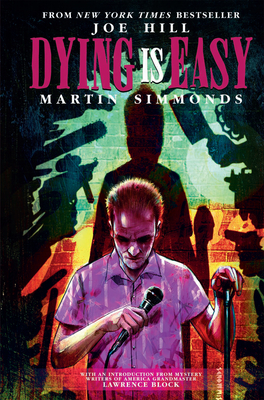 By Joe Hill, Martin Simmonds (Illustrator)
$19.99
ON HAND in at least ONE of our stores. Click through or call for up-to-the-minute availability.

Meet Syd "Sh*t-Talk" Homes, a disgraced ex-cop turned bitter stand-up comic turned... possible felon? Carl Dixon is on the verge of comedy superstardom and he got there the dirty way: by stealing jokes. He's got a killer act, an ugly past, and more enemies than punchlines. So when someone asks Syd Homes how much it would cost to have Dixon killed, Syd isn't surprised in the slightest. But, once he's accused, he's on the run and it's going to take all of his investigative chops to suss out the real killer before he gets caught.

This crime thriller by writer Joe Hill and artist Martin Simmonds follows in the tradition of fair-play mysteries inviting readers to solve the murder before Syd does!

Joe Hill is the #1 New York Times bestselling author of Full Throttle, The Fireman, Heart-Shaped Box, and NOS4A2, recently made into a TV series from AMC. His horror novella In the Tall Grass, co-written with Stephen King, was made into a feature film from Netflix. His book of short stories, 20th Century Ghosts, won the Bram Stoker Award and British Fantasy Award for Best Collection. He earned the Eisner Award for Best Writer for his long-running comic book series, Locke & Key, featuring the eye-popping art of Gabriel Rodríguez.

Martin Simmonds is a British comic book artist, painter, and graphic designer best known for his work on Titan's Death Sentence. PUNKS NOT DEAD vol. 1: Teenage Kicks has brought him to the attention of major US comic book publishers including Marvel and Image Comics. His dynamic layouts and arresting color combinations have earned him comparisons to industry legend Bill Sienkiewicz.

"The humour in the book is super dark which I appreciated and Simmonds’ artwork is fantastic." —E.A. Henson, Biff Bam Pop!

"If you’re a fan of Hill’s work, of IDW, or of the crime/mystery genre, you’re in for a treat." —Big Shiny Robot

"Joe Hill is such a great fit for comics." —Mike Maillaro, Comics Nexus

"It’s a perfect pairing of script to art." —Bloody Disgusting

"Jokes, drinks, and murder schemes sound like a fun ride to me." —Comic Book Invest

"Everything comes together for a very cinematic feel." —Gay League

"Hill provides great dialogue for his characters. It sounds realistic, like conversations among comedians you would not be surprised to overhear at a comedy club." —Medium

"Joe Hill and Martin Simmonds create a well-executed and masterful story that allows you to build your list of suspects." —Rogues Portal

“Joe Hill takes stand-up comedy down a dark path in a comic that grins big with bloody teeth. He’s got us hooked.” —Chuck Wendig, author of Wanderers and Blackbirds

"Dying is Easy is a grab-you-by-the-throat noir gritty enough to leave dirt under your nails." —Paul Tremblay, author of A Head Full of Ghosts and The Cabin at the End of the World

“Dark humor straight out of a Coen brothers movie and lush, layered artwork that stops you in your tracks.” —Delilah S. Dawson, author of Star Wars: Phasma and Ladycastle

“A combination of comedy and tragedy that only Joe Hill could conjure... The shot in the arm for crime books that we all needed.” —Brea Grant, filmmaker & author

“A total blast from start to finish, Dying is Easy is slick, cool, and brazenly funny." —Rio Youers, author of Halcyon and Westlake Soul

“An astonishing odyssey into an underworld of murder, guilt, and comedy… and a hero/anti-hero in Syd Homes, who takes us to the heart of moral choices and the meaning of creativity and humanity.” —Kate Williams, historian and author of The House of Shadows and Becoming
Queen

“All the elements of something great are here…” —Starburst Magazine

"A great tale told well through the medium of a graphic novel. Hill’s writing is excellent. It’s plain to see that he’s taking after his father (Stephen King) in being able to craft award-winning fiction in many different styles and genres." —British Fantasy Society