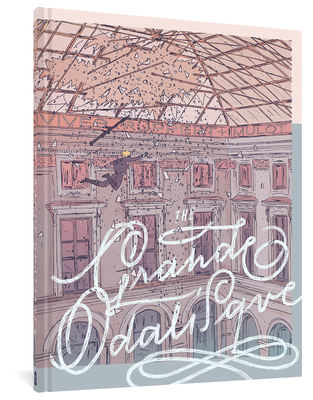 By Jerome Mulot, Florent Ruppert, Bastien Vives
$24.99
ON HAND in at least ONE of our stores. Click through or call for up-to-the-minute availability.

In this graphic novel, two women art thieves bring in a third wheel for their biggest caper yet.

Alex and Carole, friends since childhood, are now (literal) partners in crime. But the heist - to steal the Ingres painting The Grande Odalisque from the Louvre in Paris - is too much for the duo to handle, so they bring in Clarence, a bureaucrat’s son with a price on his head by a Mexican drug cartel and, more importantly, an arms dealer. Next is Sam, a stunt motorcyclist and boxer by trade, who proves trigger happy with tranquilizer darts. Using soda can smoke bombs, rocket launchers, and hang gliders, Alex, Carole, and Sam set off a set of circumstances that results in a battle with the French Special Forces - and their partnership, which was on the rocks, will never be the same again. Ruppert and Mulot, two of the most innovative comic creators in the world, team up with multiple Angouleme prize winner Bastien Vives to bring you this impossibly funny, violent, and sexy action-packed thriller.

Jérôme Mulot is best known for his comics collaborations with Ruppert; each French artist both writes and draws. The two met at the National School of art in Dijon and began publishing their creations in their fanzine Del Adventure. Together they won the Revelation Prize from the Angouleme International Comics Festival for Barrel of Monkeys (Panier de Singe). They began publishing the crime fiction le Grande Odalisque in 2012.

Florent Ruppert is a French comics writer and artist who frequently collaborates with Mulot. The two met at the National School of art in Dijon and began publishing their creations in their fanzine Del Adventure. Together, they won the Revelation Prize from the Angouleme International Comics Festival for Barrel of Monkeys (Panier de Singe). They began publishing the crime fiction le Grande Odalisque in 2012.

Bastien Vives is a Parisian who has drawn or collaborated on more than a dozen graphic novels since his published debut in 2006. The Angouleme Comics Festival granted Vives the "Revelation" Award in 2009 and the prize for best series in 2015.

If you like comics, and you’re also in need of some serious, escapist fun, I suggest that you dive straight into The Grande Odalisque.

Mixing top-notch thrills with introspective character study, this adventure never takes itself too seriously. It’s a delicious caper with all the trimmings.
— Publishers Weekly

The Grande Odalisque is quick-witted and technically polished, anchored by the three riveting women at its center and their misadventures.

Atmospheric, joyous, and sarcastically sexy, The Grande Odalisque uses all of the genre expectations of a heist and turns them up higher than Seth Rogen on the cover of the British GQ.