Harry Potter: A Pop-Up Guide to Diagon Alley and Beyond (Hardcover) 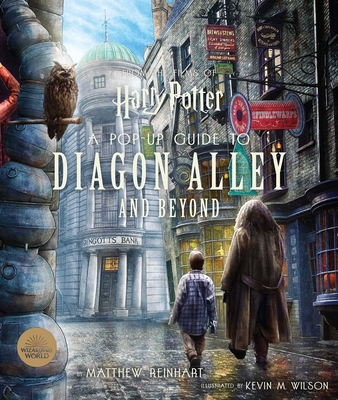 This exhilarating pop-up book invites you to relive the movie adventures of Hermione Granger, Ron Weasley, and the Boy Who Lived—Harry Potter—as you explore London’s magical Diagon Alley like never before.

Inside, gorgeously intricate pop-up spreads render fan-favorite Diagon Alley establishments such as Ollivanders, Weasleys’ Wizard Wheezes, and the Leaky Cauldron, plus other locales like the Ministry of Magic and platform nine and three-quarters. Pull tabs allow fans to command the action—rescue a Ukrainian Ironbelly dragon from the depths of Gringotts, or help Harry navigate out of Knockturn Alley after a Floo powder mishap. Alongside each pop, discover facts and insights from the making of the Harry Potter films. Plus, the book opens into a displayable 3D diorama of all the pop-ups at once.

Packed with amazing moments and hidden surprises, Harry Potter: A Pop-Up Guide to Diagon Alley and Beyond is a landmark new pop-up book guaranteed to impress Harry Potter fans everywhere.

Matthew Reinhart studied industrial design at the Pratt Institute in Brooklyn, New York, before finding his calling as a paper engineer. His books include the best-selling Star Wars: A Pop-Up Guide to the Galaxy, Game of Thrones: A Pop-Up Guide to Westeros, and DC Super Heroes: The Ultimate Pop-Up Book, among many other award-winning titles. He lives in San Francisco.

Kevin Wilson has exhibited his work globally and worked with clients such as IMAX, Marvel, and Bad Robot. He lives with his wife and two daughters in the south of England.

"Make this holiday magical with the ideal gift that will delight Harry Potter fans and Wizarding World-loving families."

"A masterful pop-up book experience... with every page, there’s a chance to get lost down Knockturn Alley after a Floo powder mishap, or face off with na Ukrainian Ironbelly dragon in the depths of Gringotts – and many, many more hidden surprises."
— Hollywood Life

"The amount of detail is almost overwhelming. You are immediately transported to Diagon Alley."
— Neatorama

"The amount of detail is almost overwhelming. You are immediately transported to Diagon Alley."
— Neatorama

"You’ll be mesmerized by the complexity and coolness of this incredibly detailed pop-up book."
— FanBolt

"Next-level delightful. It’s equivalent to the difference between a Muggle magic trick and a real spell."
— The Leaky Cauldron

"Matthew Reinhart has created incredibly detailed pop-up books for the Star Wars, Game of Thrones, and Harry Potter universes. This one takes fans through Diagon Alley and beyond."
— Parade