When the 49ers Were Kings: How Bill Walsh and Ed DeBartolo Jr. Built a Football Dynasty in San Francisco (Hardcover) 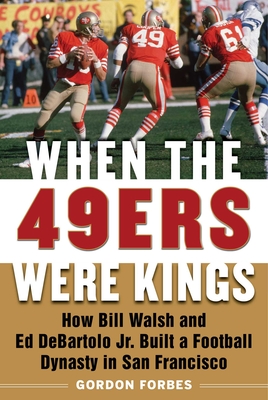 In 1979, San Francisco was in turmoil attempting to recover from the assassination of two of its leaders: Mayor George Moscone and Supervisor Harvey Milk. The troubled city was in need of an emotional boost to restore their pride. But as the year drew to a sad close, the city’s professional football team, the 49ers, endured its second straight 2–14 season and it, too, was in deep despair. Critics jumped on Eddie DeBartolo Jr., the new owner, along with rookie head coach Bill Walsh. The thirty-year-old DeBartolo, handed the team by his billionaire father, was the league’s youngest owner. Walsh had been passed over in Cincinnati when the Bengals made a coaching change.

Yet there were promising signs that the 49ers were headed into a new era. The losses were closer. The player draft included an exciting quarterback named Joe Montana. The favorable signs proved prophetic. Over the next decade, the 49ers created a dynasty that was as unique as it was unexpected, winning four Super Bowls. The heroes were Walsh, the coach of speed and detail and long working hours, and Montana, who proved to be the perfect fit for Walsh’s fast-paced West Coast offense. In When the 49ers Were Kings , award-winning football writer Gordon Forbes examines how Walsh and DeBartolo assembled one of the greatest teams in pro football history featuring a legendary cast including Montana, Jerry Rice, and Ronnie Lott and unforgettable moments such as Dwight Clark and “The Catch,” a key goal-line stand in their first Super Bowl victory, and the last-minute drive capped by John Taylor’s Super Bowl-winning touchdown in Walsh’s final game.

“The good old days, the days of Camelot,” 49ers executive John McVay called the exciting decade. It was a special time in a very special city when Walsh and DeBartolo made the 49ers kings of San Francisco.

Gordon Forbes is one of the most prolific sports writers today. In his thirty-five-year career he has covered more than nine hundred games, including thirty-nine Super Bowls. He spent two decades as the pro football editor at USA Today. In 1988, he was a recipient of the Prop Football Hall of Fame’s Dick McCann Memorial Award. He lives in Lakewood, New Jersey, with his cockapoo, Smarty Jones.