Thrust: A Spasmodic Pictorial History of the Codpiece in Art (ekphrasis) (Paperback) 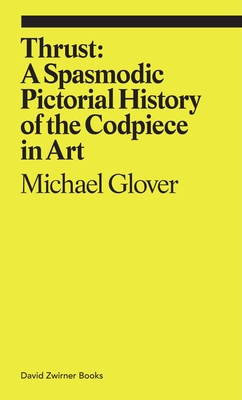 A laugh-out-loud visual history of the strangest piece of men’s clothing ever created: the codpiece.

The codpiece was fashioned in the Middle Ages to close a revealing gap between two separate pieces of men’s tights. By the sixteenth century, it had become an upscale must-have accessory. This lighthearted, illustrated examination of its history pulls in writers from Rabelais to Shakespeare and figures from Henry VIII to Alice Cooper. Glover’s witty and entertaining prose reveals how male vanity turned a piece of cloth into a bulging and absurd representation of masculinity itself. The codpiece, painted again and again by masters such as Titian, Holbein, Giorgione, and Bruegel, became a symbol of royalty, debauchery, virility, and religious seriousness—all in one.

Centuries of male self-importance and delusion are on display in this highly enjoyably new title. Glover’s book moves from paintings to contemporary culture and back again as it charts the growing popularity of the codpiece and its eventual decline. The first history of its kind, this book is a must-read for art historians, anthropologists, fashion aficionados, and readers looking for a good, long laugh.

Michael Glover is a Sheffield-born, Cambridge-educated, London-based poet and art critic, and poetry editor of the Tablet. He has written regularly for the Independent, The Times, the Financial Times, the New Statesman, and The Economist. He has also been a London correspondent for ARTNews. His latest books include Late Days (2018), Hypothetical May Morning (2018), Neo Rauch (2019), The Book of Extremities (2019), and Great Works: Encounters with Art (2016).

“[Michael Glover] takes us on a marvellous journey through portraits – including works by Titian, Holbein and Parmigianino - in which the codpiece is a protagonist.”
— Ben Luke

“[The codpiece] had a big year: it is the subject of a slim new treatise, the color of artisanal gatorade...”
— Rachel Tashjian

“From coy to curly-wurly, for a brief moment the codpiece was inescapable, in life and in art...”
— Staff

“Glover looks for clues in the litany of codpieces jutting from Renaissance paintings, leading a perceptive tour of the nether regions.”
— Dan Piepenbring