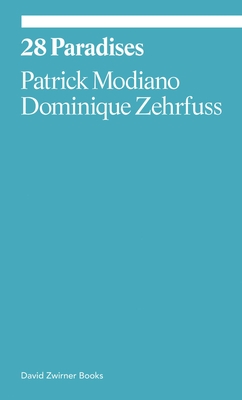 By Patrick Modiano, Dominique Zehrfuss, Damion Searls (Translated by)
$12.95
ON HAND in at least ONE of our stores. Click through or call for up-to-the-minute availability.

Published in English for the first time, 28 Paradises is the marriage of prose and painting by Nobel-prize winning author Patrick Modiano and his partner, the illustrator Dominique Zehrfuss.

28 Paradises is a rare book: it reveals not only the individual talents of the authors, Modiano and Zehrfuss, but also the depth of the couple’s creative union. Sensitively translated into English for the first time by Damion Searls, 28 Paradises captures the exquisite sadness of waking from a beautiful dream. There are twenty-eight dreams in this book, or perhaps one dream in twenty-eight parts—visions of paradise imagined by Zehrfuss during a time of deep sadness. Captured first in Zehrfuss’s brightly colored gouaches, each paradise was then refashioned as a poem by Modiano.

Zehrfuss’s paintings are Edens in miniature, and rather than describe them outright, Modiano dreams himself into these reveries in quiet, understated verse. The reader enters this shared realm in an experience less like paging through a book and more like slipping into a shared world. These paradises are wishes for moments when a painting, or a poem, or a lover—perhaps they are not so different—relieves the loneliness of being human. As Modiano writes with a touch of wistfulness, “The Lilliputian painted her paradises / And I / Next to her / Wrote a poem.” A pure example of ekphrastic writing—poetry inspired by paintings—this book shows how writing and visual art can together create a unique emotional experience.

Patrick Modiano spent his childhood between Paris, Haute-Savoie, and Jouy-en-Josas. Having been awarded his baccalaureate, he dedicated himself to literature at the age of eighteen. It was Raymond Queneau who introduced to him the literary circles of Paris in the 1960s. He won the Grand Prix du roman de l’Académie française in 1972 and the Prix Goncourt in 1978. In 2014, his œuvre was crowned with the Nobel Prize in Literature.

Dominique Zehrfuss is an illustrator and jewelry designer living in Paris. After studying architecture at École des Beaux-Art in Paris, she began to paint. Quickly, however, illustrating children’s books took over her imagination. She has illustrated three books written by Patrick Modiano, titled Une aventure de Choura (1986), Une fiancée pour Choura (1987), and 28 Paradis (2005).

Damion Searls is an American translator and writer. He has translated forty books from German, French, Norwegian, and Dutch, including Patrick Modiano’s novels Young Once (2016) and Sundays in August (2017). David Zwirner Books’s ekphrasis series also includes his translation of Rainer Maria Rilke’s Letters to a Young Painter (2017). His own writing has been translated into ten languages.

“A tiny, highbrow volume for the beach, or reveries of it: poems in the nostalgic, laconic manner of novelist Modiano, 2014 Nobel laureate, and crisp, lovely, pastel hued miniatures by his wife Zehrfuss, jewellery designer and illustrator.”
— Jackie Wullschläger

“28 Paradises is the marriage of prose and painting… it is a rare book that reveals not only the individual talents of the authors but also the depth of the couple’s creative union.”
— Staff

With 28 Paradies “the ekphrasis series takes an exciting step away from the realm of the academic and historical towards a more humble space occupied by poetry and art… it’s an unassuming and thrilling work, a little treasure to be shelved among giants.”
— Jeff Alford