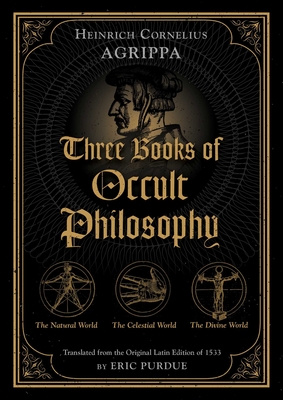 By Heinrich Cornelius Agrippa, Eric Purdue (Translated with commentary by)
$195.00

• Corrects the many mistranslations, copyist mistakes, and errors introduced from other editions, drawing on new research and access to Agrippa’s source texts

• Restores all of Agrippa’s original illustrations

One of the most important texts in the Western magical tradition for nearly 500 years, Heinrich Cornelius Agrippa’s 1533 work Three Books of Occult Philosophy collates a multitude of sources from the Classical, Medieval, and Renaissance periods and organizes them into a coherent explanation of the magical world. Divided into three parts--the natural world, the celestial world, and the divine world--the book systematically explains the philosophy, logic, and methods of magic and astrology and how they work.

The basis for 19th-century magical orders such as the Golden Dawn and a primary source for countless books on magical uses of stones, herbs, incense, and astrology, Agrippa’s many lists and diagrams have proven invaluable to magicians since the 16th century. Yet, until now, all English editions of Agrippa’s Three Books were based on the same flawed 1651 translation from the mysterious “J.F.”

In this new translation from the original 1533 Latin edition, Eric Purdue corrects the many mistranslations, copyist mistakes, and errors introduced from other editions as well as restores all of Agrippa’s original illustrations. Purdue notates every correction and offers commentary, drawing on major developments in the research of older magical and astrological texts. He also presents a nearly complete bibliography of Agrippa’s primary sources, revealing Agrippa as a mainstream scholar of his day.

Presenting the first new English translation of Three Books of Occult Philosophy in more than 350 years, this three-volume hardcover boxed set repairs the gaps in knowledge pervasive in the original translation and restores the magical spirit of Agrippa’s masterpiece, allowing us to hear Agrippa speak again.

Heinrich Cornelius Agrippa von Nettesheim (1486-1535) was a German polymath, physician, legal scholar, soldier, theologian, and occult writer. Entering the University of Cologne at the age of 13, he graduated with a Master of Arts at 16 and went on to study with abbot Johannes Trithemius, famous as the teacher of Paracelsus. Acclaimed for his lectures on Reuchlin and the Corpus Hermeticum at universities across Europe, Agrippa acted as archivist for the Holy Roman Emperor Charles V. Defying accusations of heresy and scrutiny by the Inquisition of Cologne, he published the final version of Three Books of Occult Philosophy two years before his death. Agrippa is considered one of the most influential occultists of the early modern period.

Eric Purdue has studied metaphysics and the occult and has practiced magic and astrology for more than thirty years, with a particular focus on practical folk and astrological magic. Through his lectures and writings on traditional astrology and talismanic magic, he has been a notable voice on the subjects of medieval astrology, traditional magical systems, and the legacy of Heinrich Cornelius Agrippa. His new translation of Three Books of Occult Philosophy was more than 10 years in the making.

“Eric Purdue’s fine new translation of H. C. Agrippa’s Three Books of Occult Philosophy is a landmark edition of this essential work. Unquestionably the most comprehensive work of the European esoteric sciences, this timely new publication of this encyclopedic masterwork is accompanied by illustrations restored from the original as well as the translator’s erudite notes, sources, and references. Agrippa’s works are fundamental to the study of all branches and aspects of the tradition, and no esoteric book collection should be without this outstanding edition.”
— Nigel Pennick, founder of the Institute of Geomantic Research and the Library of the European Tradit

“Anyone interested in the roots and branches of modern magic has repeatedly heard of the works of Agrippa. Here in these beautiful volumes we have not only an aesthetically pleasing edition, but one that has paid close attention to the technical and linguistic details as never before. They will make for better historians and practical practitioners for those who wish to undertake experiments in the bold art of magic.”
— Stephen E. Flowers, author of The Fraternitas Saturni