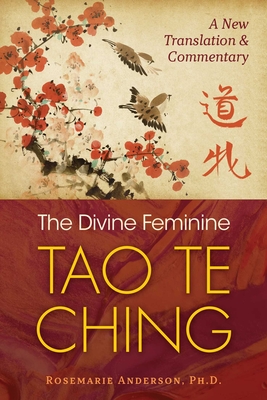 In this book, Rosemarie Anderson shares her discoveries of the Divine Feminine Tao alongside her original translation of the Tao Te Ching. Working from ancient silk and bamboo slip manuscripts, the oldest known copies of the Tao Te Ching, the author slowly translated all 81 chapters over the course of two years, allowing each section to reveal its intimate poetic and spiritual nature. To her surprise, she discovered that the Tao was unmistakably feminine, consistently referred to as “mother,” “virgin,” and the “womb” of creation.

Anderson explains how the Tao is a feminine force, the Dark Womb of Creation, the Immortal Void renewing life again and again in ordinary times and in times of crisis. She offers commentary for each of the 81 chapters to help reveal their profound wisdom. The author also restores the chapters’ simplicity and musical undertones, explaining how, in the original Chinese manuscripts, the text is poetic and rhymed because the Tao Te Ching was often recited or sung--yet most English translations are written in scholarly prose with long sentences and complex syntax. She shows how the great Tao’s message of wei wu wei--“act without acting” and “do without doing”--offers a path of peace and well-being for ourselves and for our relationships with others and the earth, a path that arises from spontaneous action that seeks no gain for the self.

Capturing the original feminine nature of this ancient text, Anderson’s translation sheds new light on the esoteric wisdom contained within the Tao Te Ching and on the mystical feminine essence of the Tao.

Rosemarie Anderson, Ph.D., is professor emerita of transpersonal psychology at Sofia University, an author, and an Episcopal priest. She cofounded the Transpersonal Research Network in 2014 and the Sacred Science Circle in 2017. Also in 2017 she received the Abraham Maslow Heritage Award from the Society of Humanistic Psychology of the American Psychological Association. She is the author of several books, including Celtic Oracles and Transforming Self and Others through Research. She lives in Williams, Oregon.

“Rosemarie Anderson’s translation of the Tao Te Ching is perhaps the truest reflection of this ancient text, which refers to the Tao not in an impersonal way but in a feminine way. Anderson’s contemplative approach also adds to technical accuracy--the lyricism, beauty, and mysticism of the original way the verses were performed. Her stunning achievement revitalizes this venerable wisdom and powerfully evokes its deeper meanings.”
— Jenny Wade, PH.D., author of Changes of Mind

“Centering on the Tao as ‘womb of the universe’ and Te as both ‘virtue’ and potentiality, Rosemarie Anderson gives us a delightful ease of engagement with the ancient Chinese wise sayings. Her embodied approach is heart-opening; the crisp, direct lines are invitational; and the artful spacing of the layout adds to the beauty. I feel at home in this translation. And more to the point, it’s exactly what we need now that things are falling apart. Peaceful means could further our survival.”
— Judy Grahn, PH.D., poet, activist, and author of Eruptions of Inanna

“Rosemarie Anderson’s unique translation of the Tao Te Ching allows us, for the first time, to experience the mystical feminine essence of the Tao--a combination of the power and tenderness, exhortation and patience of the Divine Mother--and invites us to walk the path of transformation for ourselves. Rosemarie translates like a poet--lingering, listening into the rhythm and texture of the words, allowing each phrase to speak its wisdom. And that’s exactly how you should read this book. In doing so, your relationship with the Tao will be forever enriched.”
— Linda Sparrowe, teacher and author of The Woman’s Book of Yoga and Health

“As a classic of world literature, the Tao Te Ching seems to unfurl its majestic layers of wisdom anew for each new generation. Professor Anderson has contributed incisively to its history by giving us a layer that speaks eloquently and urgently to our age: the feminine nature of the Tao. As if sitting in the depths of the poetry for centuries waiting to be awakened, the feminine can now speak of her paths and insights that radiate so finely through this new translation. It is rare indeed that a scholar excels in diverse fields; having blazed a creative and influential trail in transpersonal psychology over recent decades, Anderson has now aspired to the challenge of translation. All translation is also interpretation, and Anderson’s sensitive grasp of the wisdom in the Tao will benefit all who read this work.”
— Brian L. Lancaster, PH.D., author of Approaches to Consciousness

“While I have purchased a dozen or more translations of the Tao Te Ching over the years and have found its verses beautiful and practical, Rosemarie Anderson’s version deepened my appreciation for this classic book by drawing my attention to the lyrical, mystical, and feminine nature of the verses--perspectives never before described with such depth and authority. Anderson makes a persuasive case that the Tao is female in nature, and this realization illumines portions of the work that would otherwise be ignored. She also reminds us that the verses were often sung by ancient bards, a provocative practice that her readers can attempt themselves. When I am asked which translation I would recommend to novices, I will not hesitate to choose this one.”
— Stanley Krippner, PH.D., coauthor of Personal Mythology

“Rosemarie Anderson eloquently gives voice to the feminine soul of the Tao Te Ching. With a profound and in-depth understanding, she reveals the graceful connotations and helps us to experience the beauty and wisdom in the verses. Her commentaries bring new insight to an ancient text full of esoteric knowledge pertinent to the challenges of our modern world.”
— Lee L. Jampolsky, Ph.D., author of Healing the Addictive Personality

“Anderson, professor emerita of psychology at Sofia University, translates and delivers a fresh take on the Tao Te Ching, keeping an eye on the feminine characteristics of the text. Anderson argues this concept of wei wu wei (or ‘action that is non-action’) is inherently feminine, ‘portrayed as the mother, virgin, and womb of creation’ and driven by ‘tenderness and selflessness.’ Some of Anderson’s evidence is persuasive--such as the many metaphors of the womb and mentions of the Tao creating life--and justify her approach of using female pronouns to identify the Tao throughout....Anderson’s attention to detail and creative interpretations will open this ancient text to a new audience.”
— Publishers Weekly

"In her introduction, Rosemarie Anderson shares her journey that culminated with her sitting down and doing her own translation of the Tao Te Ching. She shares her genuine surprise at how overtly feminine the Tao was in her translation. After reading The Divine Feminine Tao Te Ching I reached for my other two copies of the Tao, one from 2008 translated by James Legge and the other from 1993 that was translated by Man-Ho Kwok, Martin Palmer, and Jay Ramsay. And whoa yeah, there are many differences between the three texts. In the divine feminine defense of the other two, they both did translate some phrases in a more feminine way, but none to the extent of Anderson’s translation. However, it’s not just the overtly feminine translation that makes The Divine Feminine Tao Te Ching my favorite. Anderson’s presentation of the text is more poetic and lyrical than the others I read. It flows better when being read, and I suspect sounds wonderful read aloud. It lends itself nicely to being read repeatedly, and the Tao Te Ching is a text that is meant to be repeatedly read and reflected on. All of this is to say, The Divine Feminine Tao Te Ching by Rosemarie Anderson will be my definitive translation of the Tao going forward."
— The Magical Buffet

"By Anderson’s own account, it’s clear that the translator did the requisite work of becoming fully immersed in Chinese culture, spending years abroad to understand its history in order to deeply embody the language. Her practice of contemplation was guided by the Tao’s essential lesson of “wei wu wei:” act without acting, know without knowing. By listening and feeling deeply, Anderson allowed the ancient text to reveal timeless lessons to unveil a feminist perspective for Western seekers of wisdom."
— Maileen Hamto, San Francisco Book Review

"Being a bit of an adventurer myself and obviously a female, I know the courage it takes to set off on adventure, and then to write an amazing book on top of it. I’ve read the classic texts regarding the Tao Te Ching but never really understood the intense feminine behind “IT”. We need more than ever a new perspective on life, traditional and ancient, and the Divine Feminine is the perfect lens in today’s world to see past and through masculine perceptions."
— Dhara Lemos, Lotus Guide

"...an important new translation and commentary of this classic text, which every enthusiast will want to buy that puts the emphasis on the Tao as intrinsically feminine with its frequent imagery referring to mother, virgin and womb of creation, as well as the injunction to ‘act without acting’ – wei wu wei... "
— Paradigm Explorer

"Readers who have come to this rendering of the Tao Te Ching having read other translations will hear the text afresh through the voice of the Divine Feminine, while those who have not yet read other versions will have had the good fortune to have found a gold standard by which other versions may be measured."
— Melinda Powell, Journal for the Study of Spirituality

"The poems are presented in a beautiful, flowing form, the typography spacious. And the book wraps up nicely with Notes on the translation and calligraphy, as well as an annotated bibliography. I recommend this little gem of a book to anyone wanting to study the Tao Te Ching – especially to consider it in the context of a gentle, non-striving practice."
— Cindie Chavez, Musing Mystical