From the Monastery to the World: The Letters of Thomas Merton and Ernesto Cardenal (Paperback) 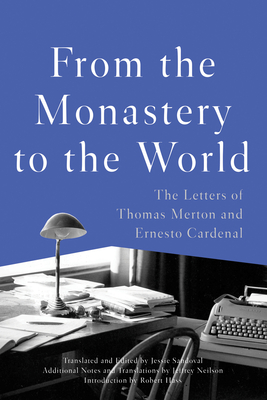 This correspondence, full of warmth, candor, and humor, reflects the friendship of two men who worked to reconcile their intense spirituality with an urgent sense of social justice in a violent and troubled time. From the Monastery to the World collects the correspondence between two of the best-known poet-priests of the twentieth century, Thomas Merton and Ernesto Cardenal. The letters of Father Cardenal are translated into English here for the first time. The young Nicaraguan poet Cardenal first came under the tutelage of Merton as a novice at a Trappist monastery in rural Kentucky in 1957. The letters they wrote to each other between 1959 and Merton's death in 1968 give readers a fascinating glimpse into the spiritual and political struggles of Merton--then the most famous writer about spiritual matters in the English-speaking world--and Cardenal, the seminarian and priest who had left monastic silence to build a utopian community in his native land and later became a revolutionary and Minister of Culture for Nicaragua's Sandinista government. These are the years when Merton deepens his readings in Zen Buddhism and Chinese Taoism, when the civil rights movement in the United States and the international movement against the nuclear arms race intensifies his sense of the need for social engagement. These are the years Cardenal is ordained as a Catholic priest and begins to create the spiritual community on the island of Solentiname, which would propel him to the front of the movement that became known as Liberation Theology, even as the reactionary forces in Central and Latin America waged a ruthless war against the Church's social reformers.

THOMAS MERTON (1915-1968), a monk who lived in isolation for several years, is one of the most well-known Catholic writers of the twentieth century. He was a prolific poet, religious writer, and essayist whose diversity of work has rendered a precise definition of his life and an estimation of the significance of his career difficult. Merton was a Trappist, a member of a Roman Catholic brotherhood known for its austere lifestyle and rule of silence in which almost all conversation is forbidden. ERNESTO CARDENAL MARTINEZ (born January 20, 1925) is a Nicaraguan Catholic priest, poet, and politician. He is a Liberation Theologian and the founder of the primitivist art community in the Solentiname Islands, where he lived for more than ten years (1965-1977). A member of the Nicaraguan Sandinistas, a party he has since left, he was Nicaragua's minister of culture from 1979 to 1987.