Chris Chelios: Made in America (Paperback) 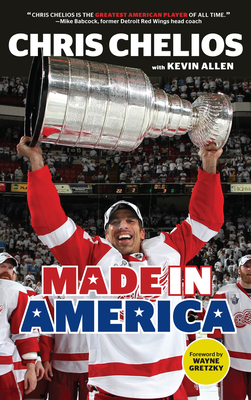 An irreverent, raucous account of Chelios's life and 26 seasons in the NHL

From being inducted to the Hockey Hall of Fame in 2013, to serving in an executive role on the Detroit Red Wings, and signing on to become an NHL analyst for Fox Sports 1, Chris Chelios has proven himself to be a man of many talents and here he tells his story. Drafted by the Montreal Canadiens in 1981, Chelios enjoyed a long career in the NHL, playing for 26 seasons for the Canadiens as well as the Chicago Blackhawks and the Detroit Red Wings, two diehard hockey markets in which he has become a beloved figure. From the 1992 Stanley Cup final to the 2006 Winter Olympics team, Chelios shares his achievements on the ice while providing new information on his life off it to readers, making this autobiography a must-have not only for Chelios fans, but anyone who loves the game of hockey.

Chris Chelios was a defenseman who played in the NHL for 26 seasons for the Chicago Blackhawks, Detroit Red Wings, Montreal Canadiens, and Atlanta Thrashers. He was elected to the Hockey Hall of Fame in 2013 and won three Stanley Cups. He is currently the executive advisor to general manager of the Detroit Red Wings. Kevin Allen is the author or coauthor of more than a dozen sports books, including Brett: His Own Story, Star-Spangled Hockey: Celebrating 75 Years of USA Hockey, and Without Fear: Hockey’s 50 Greatest Goaltenders. He lives in Ypsilanti, Michigan. Wayne Gretzky, known as “The Great One” is regarded as the greatest hockey player in the sport’s history. He lives in Westlake Village, California.

"Whether you are a Blackhawks fan who can’t quite let it go, or just a hockey fan anxious for a terrific read, Made in America is a worthy choice."  —Blackhawks.NHL.com, on the cloth edition

"In an often colorful account, the greatest hockey player from the Chicago area details one of the game's longest and most successful careers."  —Chicago Tribune, on the cloth edition